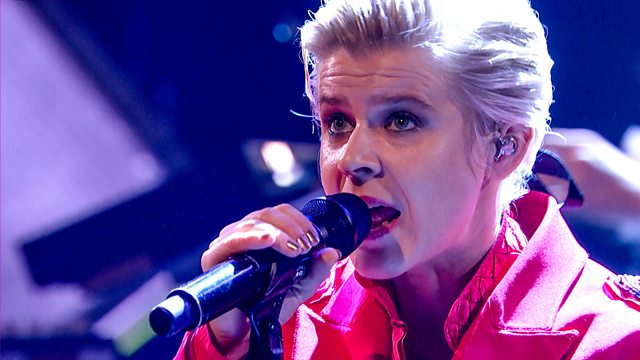 Joining Jools Holland on the final show of this run are Jungle, The Good, the Bad & the Queen, Robyn, Mattiel and Terry Reid.

Joining Jools on the final show of this run are south London's Jungle, the soul/funk collective formed around the nucleus of childhood friends Tom McFarland and Josh Lloyd-Watson. They perform a couple of tracks from their recently released second album For Ever.

The supergroup comprising of Paul Simonon, Tony Allen, Simon Tong and Damon Albarn, The Good, the Bad & the Queen, make a welcome return almost 12 years on from their self-titled debut album with songs from their long-awaited follow-up.

Swedish pop queen Robyn is another artist who had been away too long, until breaking an eight-year silence with her aptly named comeback single Missing U this summer. She makes her debut on the show with a couple of tracks from her brand new album Honey, along with one or two of the tunes which helpfully mapped out the sound of the next decade.

Making her TV debut is Atlanta's Mattiel, who grew up as an only child and working on her mother's farm, and cites influences such as Screamin' Jay Hawkins, Andre 3000, Marc Bolan and Sister Rosetta Tharpe, which can all be found in her brand of fiery rock and soul. She brings a couple of belters from her eponymous debut album.

One of British rock's greatest vocalists, Terry Reid's career is littered with a veritable who's who of legendary names he has performed with. Deep Purple and Led Zeppelin's loss is our gain when Superlungs joins the line-up on the show with a song.

Completing the line-up is east London grime original and the scene's articulate conscience Ghetts, who performs a track from his recent album Ghetto Gospel: The New Testament.