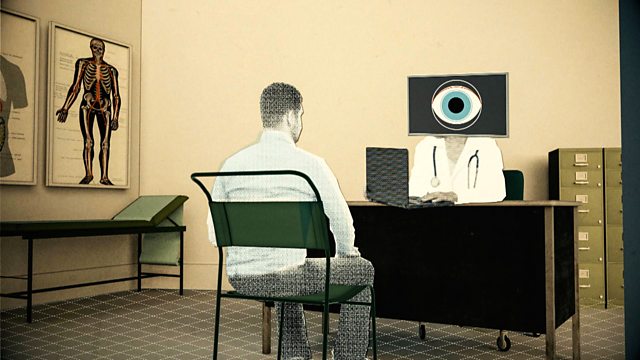 Diagnosis on Demand? The Computer Will See You Now

Dr Hannah Fry uncovers the inside story of a healthcare revolution, with behind-the-scenes access to Babylon Health, who want to prove that their AI is a match for human GPs.

Could a machine replace your doctor? Dr Hannah Fry explores the incredible ways AI is revolutionising healthcare - and what this means for all of us. This film chronicles the inside story of the AI health revolution, as one company, Babylon Health, prepare for a man v machine showdown. Can Babylon succeed in their quest to prove their AI can outperform human doctors at safe triage and accurate diagnosis?

Artificial intelligence is starting to transform healthcare beyond recognition - and tech companies large and small see almost limitless commercial opportunity. The ultimate vision is for accessible, affordable, better healthcare for almost everyone with a phone. In Britain, this is already radically changing how some of us see our GPs. And in a world with a chronic shortage of doctors, but where even the very poor own mobile phones, it could be truly revolutionary.

To witness this revolution from the inside, this film has privileged, behind-the-scenes access to ambitious British tech start-up Babylon Health. Babylon launched its GP at Hand app in London in late 2017 and has already persuaded 30,000 Londoners to quit their old GPs to register instead for this NHS 'digital first' service, where patients discuss symptoms with an AI chatbot and see a doctor in minutes 24/7 via their phone.

But GP at Hand's arrival has proved controversial - with many traditional GPs worried about the disruptive consequences for them and their patients, and others seeking to thwart its expansion nationwide. As this film reveals, there is a fundamental culture clash at play - between the 'move fast and break things' world of tech, and the cautious, diligent, often slow-moving world of medical science. So how will both camps respond when Babylon's AI attempts to pass the diagnostic sections of the Royal College of GPs exam?

Amazingly, the NHS is today the largest purchaser of fax machines in the world - and the British government are eagerly embracing AI as the remedy for our public health system's antiquated inefficiencies. British health secretary Matt Hancock is an unabashed evangelist for tech - boasting Babylon's GP at Hand as his GP. Yet some scientists are increasingly alarmed, questioning the current hype and asking where is the proof that AI health apps, now in widespread use, are effective and safe? How should they be evaluated and regulated? And what needs to happen before we all trust our health to AI?

As well as following a tumultuous year inside Babylon, both in the UK and Rwanda, the film also explores how another British AI Health start-up, Kheiron Medical, has successfully used deep learning to train its AI to detect breast cancer and now outperforms human radiologists at spotting the tell-tale signs of cancer in mammograms.

The Contraceptive Pill: How Safe Is It?—2018

See all clips from Diagnosis on Demand? The Computer Will See You Now (2)