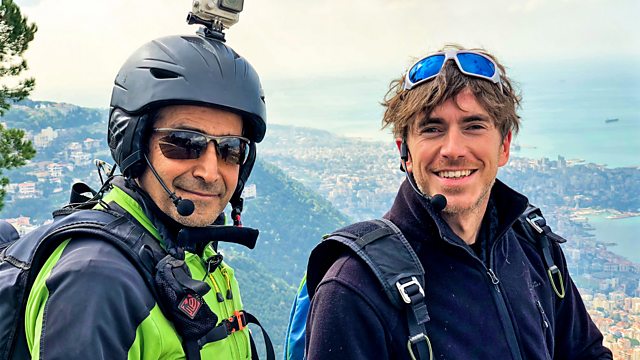 Setting off from a snowy mountain ski resort in Cyprus, Simon Reeve finds an island and a capital city still deeply divided between Turkish Cypriots and Greek Cypriots.

Simon Reeve embarks on the second leg of his epic four-part journey around the Mediterranean. Setting off from a snowy mountain ski resort in Cyprus, Simon finds an island and a capital city still deeply divided between Turkish Cypriots in the north and Greek Cypriots in the south. Simon joins the UN troops who patrol the line that separates the two sides, one of the world's longest-running peacekeeping missions. From Cyprus, Simon heads to the Middle East, a region of the Mediterranean that's also no stranger to conflict and division.

In Lebanon, Simon explores a country of breathtaking landscapes, with spectacular coastline, soaring mountains and a sacred valley known as the Qadisha, a holy site for Lebanese Christians. Staying overnight in an abandoned monastery carved into the rock face, Simon learns that in a Muslim-dominated Middle East, Christians are facing persecution and numbers are collapsing. Travelling south, Simon's next stop is Israel, a country that perhaps more than any other depends on the Mediterranean for its survival. With few friends in the region, Israel has to transport most of its goods by sea. Simon joins the Israeli Navy who patrol the coast and protect the country's offshore oil reserves using the latest military weaponry and technology, including unmanned, combat-ready drone boats.

From Israel, Simon crosses one of the world's most heavily fortified borders to reach the Gaza Strip. Palestinians and Israelis have endured a seemingly endless cycle of violence and in Gaza the result has been devastating destruction. Many building materials are restricted by an Israeli blockade on Gaza, but Simon meets an inspiring young woman who has helped reconstruction efforts by inventing an ingenious method of making bricks from ash. It's a rare ray of hope in one of the most troubled regions of the Mediterranean.

See all episodes from Mediterranean with Simon Reeve