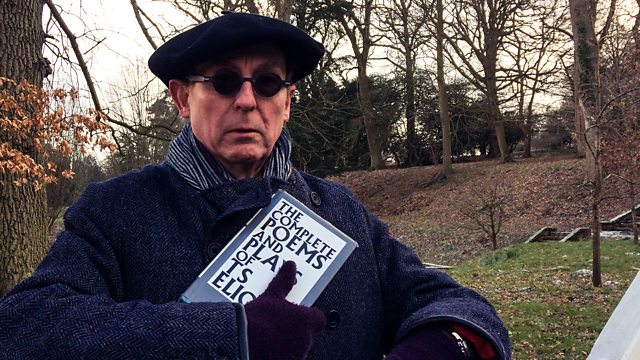 Documentary. AN Wilson explores the groundbreaking poetry of TS Eliot, tracing the personal and poetic journey he took in works such as The Love Song of J Alfred Prufrock.

AN Wilson explores the life and work of TS Eliot. From the halls of Harvard University to a Somerset village, via a Margate promenade shelter, he follows the spiritual and psychological journey that Eliot took in his most iconic poems. From The Love Song of J Alfred Prufrock to The Waste Land and from Ash Wednesday to Four Quartets, Wilson traces Eliot's life story as it informs his greatest works.

Wilson travels to the places that inspired them, visiting Eliot's family's holiday home on the Massachusetts coast, following the poet to Oxford, where he met and married his first wife, Vivien Haigh-Wood, and on to London. He explores how Eliot's realisation that he and Vivien were fundamentally incompatible influenced The Waste Land and examines how Eliot's subsequent conversion to Anglicanism coloured his later works. Wilson concludes his journey by visiting some of the key locations around which the poet structured his final masterpiece, Four Quartets.

Eliot's poetry is widely regarded as complex and difficult; it takes on weighty ideas of time, memory, faith and belief, themes which Wilson argues have as much relevance today as during the poet's lifetime. And whilst hailing his genius, Wilson does not shy away from confronting the discomforting and dark side of his work - the poems now widely regarded as anti-Semitic.