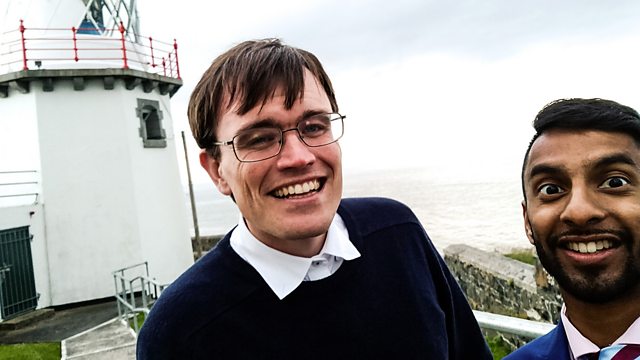 Eric Monkman and Bobby Seagull present a guide to Northern Ireland, starting with a look at a piece of aviation history that has saved thousands of lives.

University Challenge icons and real-life best friends Eric Monkman and Bobby Seagull are on a road trip with a difference. Feeding their insatiable appetite for knowledge, they visit Scotland, England, Northern Ireland and Wales in search of hidden gems of British scientific and technological ingenuity.

Their 'genius guide' to Northern Ireland celebrates some of the most significant and iconic transportation breakthroughs of the last century. It begins with an encounter with a piece of aviation history that has saved thousands of lives - the ejector seat, designed in Northern Ireland - and ends in Belfast on the deck of 'Titanic's Little Sister', with a host of inquisitive encounters along the way.

Heading west, there is a must-see for anyone with an interest in the cosmos. The Armagh Observatory has been monitoring the night sky and measuring the weather for over two centuries. Here, Monkman and Seagull encounter one of the most important telescopes ever made - the 1885 Grubb ten-inch Refractor, which played a pivotal role in the discovery and cataloguing of thousands of interstellar galaxies.

Passing through the small town of Enniskillen gives Monkman and Seagull the chance to visit a unique railway museum located inside a barber shop. As their journey through Northern Ireland nears its climax, Eric and Bobby arrive at the historic Belfast docks, where they step on board the ship known 'Titanic's little sister'. Built in 1911, The SS Nomadic ferried 274 passengers to the Titanic as it embarked upon its doomed journey and - somewhat eerily - is now the only remaining White Star Line ship in the world, outliving its tragic big sister. Finally, Monkman and Seagull meet one of the most iconic cars ever to be built in Northern Ireland - the DeLorean - famous for its appearances in the Back to the Future movies. The conversation soon turns to flux capacitors and the existential possibilities of time travel, which Monkman refuses to rule out the possibility of.

See all episodes from Monkman & Seagull's Genius Guide to Britain