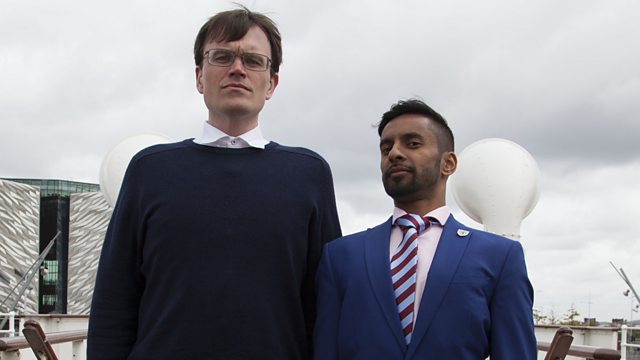 University Challenge icons and real-life best friends Eric Monkman and Bobby Seagull are on a road trip with a difference. Feeding their insatiable appetite for knowledge, they visit Scotland, England, Northern Ireland and Wales in search of hidden gems of British scientific and technological ingenuity.

Their genius guide through England showcases an assortment of remarkable inventions. It begins with a trip to Blackpool Pleasure Beach to experience Sir Hiram Maxim's 1904 Captive Flying Machines, the oldest amusement ride in Europe. These miniature rocket-shaped aeroplanes were designed by the eccentric inventor who created the first portable machine gun but whose ultimate goal was to achieve powered flight. A vertiginous spin on this historic ride gives Monkman the perfect opportunity to describe in detail the theory of centrifugal force.

Next, Southport, a quintessentially British seaside haven. It is also home to the only lawnmower museum of its kind in the world. Here, Monkman and Seagull celebrate an invention that has changed the landscape of Britain forever. As Seagull puts it, 'If an Englishman's home is his castle, then our grass is the field of our ambitions and hopes'. Monkman and Seagull are intrigued to discover the reason why the man who invented the lawnmower had to test his prototypes at night. They are also fascinated to discover that the museum is home to a lawnmower once owned by one of the greatest rock guitarists of all time.

Their next stop takes Monkman and Seagull off the beaten track to Emley Tower in Huddersfield, a colossal broadcasting mast that is one of the tallest freestanding structures in the UK, where they put their mathematical prowess to the test and measure its height using only a piece of string and a protractor. After a quick and very cosy pit-stop at the smallest museum in the world in West Yorkshire, they approach the culmination of this week's adventure - the giant telescopes of the mysterious Jodrell Bank Observatory near Macclesfield, where they contemplate life on other planets.

See all episodes from Monkman & Seagull's Genius Guide to Britain

See all clips from England (2)