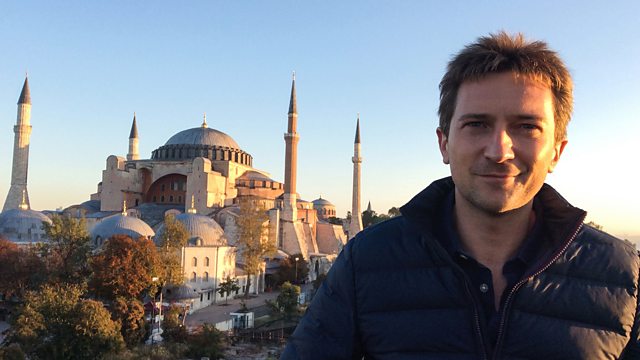 Classical historian Dr. Michael Scott takes us on an extraordinary journey through the often-invisible treasures of one of the greatest ancient cities in the world – Istanbul.

The city has been at the crossroads of Europe and Asia for over two and a half millennia. From the Greeks and Romans, through the Ottomans to the Turks, Istanbul has been fought over, destroyed and rebuilt time after time.

First Michael brings the city’s tumultuous history alive in one iconic building - the Hagia Sophia. Built by the Romans, this Christian Cathedral has survived earthquakes, riots, sieges and conquest to become a mosque and now a museum. As Michael explores, he reveals the ingenious solutions that enabled this awe-inspiring church to survive 1,500 years of turmoil.

As Istanbul, once known as Constantinople, was built by Emperor Constantine to outdo Rome itself, Michael goes in search of the mighty city the emperor built – Constantinople. Michael discovers that Istanbul is built upon layer upon layer of history and culture, one era's buildings erected on top of the other. With the help of local archeologists and experts, Michael delves into some surprising spaces – such as the once enormous Hippodrome. It began as a stadium for chariot racing but it's foundations were later converted into a huge water cistern to supply the Emperor’s Great Palace. Michael wades through its foul smelling water to uncover the Hippodrome’s secrets.

With many of the city’s most extraordinary places concealed, out of sight or underground, we turn to the latest 3D imaging technology to reveal them. Our scanning team help us to see the city as no human eye ever could; peeling back the layers of history; showing how the city has had to reinvent itself over and over through its turbulent past.

Michael’s adventure finds him unearthing a holy well, hidden 30 feet under a modern carpet shop. He walks high above the city on the most sophisticated and longest aqueduct of the Roman world and finds that part of the once glorious Great Palace of Constantine is now a burned out shelter for a homeless man. He explores the fortress headquarters of the Muslim Sultan who captured the city. And with the help of the hi-tech 3D scans, reveals one of the fortress towers as a ruthlessly efficient war machine that helped end the Roman Empire, less than 50 years before Columbus discovered America.

Along the way Michael visits the teaming exuberance of the conquering Sultan’s Grande Bazaar and uncovers the engineering innovations of the magnificent Süleymaniye Mosque, a treasure of the Ottoman Empire’s “golden age”.

But Michael goes beyond even the extraordinary 3D scans to experience Istanbul in a whole new way – through Virtual Reality - flying up, right through the ancient dome of the Hagia Sophia, seeing Istanbul as even the locals have never seen it before.