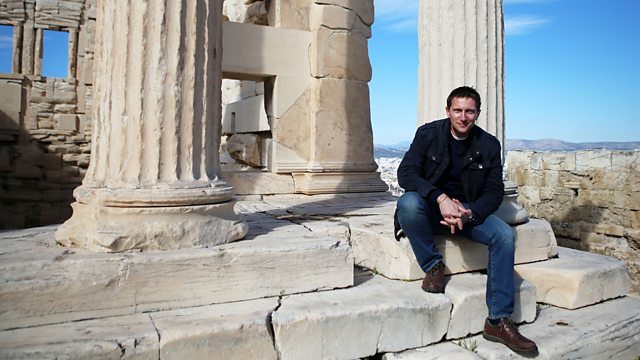 Michael Scott reveals the historical secrets of ancient Athens and tells the story of how this remarkable city created the world's first democracy 2,500 years ago.

Michael Scott uses the latest 3D-scanning technology to reveal the historical secrets of ancient Athens and tell the story of how this remarkable city created the world's first democracy two and a half thousand years ago. He begins his journey on the Acropolis, where, in the late 6th century BC, the people of Athens overthrew a tyrant and set up the world's first democracy. There, he investigates a mysterious, asymmetrical temple called the Erechtheion that sits in the shadow of the world famous Parthenon. Decoding the stories from ancient Greek mythology that were built into this temple, he reveals it to be one of the most important buildings of Ancient Athens.
Michael journeys into the landscape surrounding Athens, to the area of Laurion, 50 miles to the south of the city. He explores inside one of the ancient silver mines that dot this landscape, where an army of slaves once worked in silver production, toiling inside the labyrinth of tunnels, digging silver ore by hand for the good of the city above. He discovers a network of tunnels and galleries barely high enough to crawl through. He reveals that here, in the 480s, the miners hit upon a seam of silver that proved a massive boost to Athens&#39;s new democracy. He discovers how democratic Athenians voted on what to do with this money and instead of distributing it among the citizens, decided to invest it in a fleet of warships just in time to tackle a massive invasion force from Persia.
Michael takes a ferry to the island of Salamis, to investigate a harbour where the Greek fleet - including the new Athenian warships - gathered to prepare to take on the Persians. The battle that followed, the Battle of Salamis is considered by many scholars to be one of the most important battles of the Ancient world. Athens and its allies faced a force said to be three times their size and had Athens been defeated, its young, precarious democracy could have been lost to history. He tells the story of the battle and discusses new archaeological remains that date from that time.