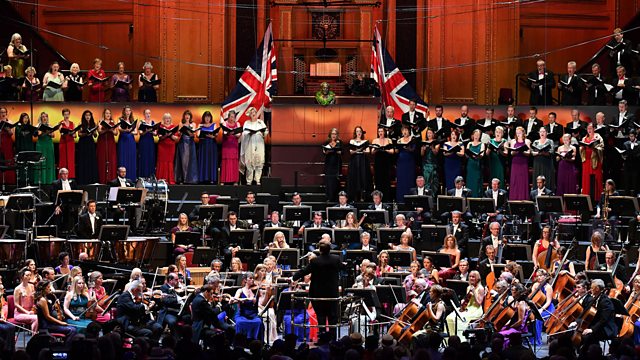 Last Night of the Proms - Part One

The 2018 Proms season comes to a close with the BBC Symphony Orchestra and their much-loved former chief conductor Sir Andrew Davis steering proceedings from the Royal Albert Hall.

The BBC Proms 2018 season comes to a close with the BBC Symphony Orchestra and their much-loved former chief conductor and Last Night of the Proms veteran Sir Andrew Davis steering proceedings live from the Royal Albert Hall. Long-standing nautical traditions of the evening are extended in Stanford's Songs of the Sea, featuring Canadian baritone Gerald Finley. The centenary of the end of the Great War is marked with a new work from Roxanna Panufnik, which also rounds off the season's original premieres and features BBC Singers and BBC Symphony Chorus.

The evening includes music by Hindemith, Berlioz and Charles Hubert Parry, who is celebrated 100 years after his death with a performance of Blest Pair of Sirens. Coverage also includes visits to Proms in the Parks across the Nation, also celebrating this annual great night in classical music. Katie Derham presents. Part two of the concert continues on BBC One.