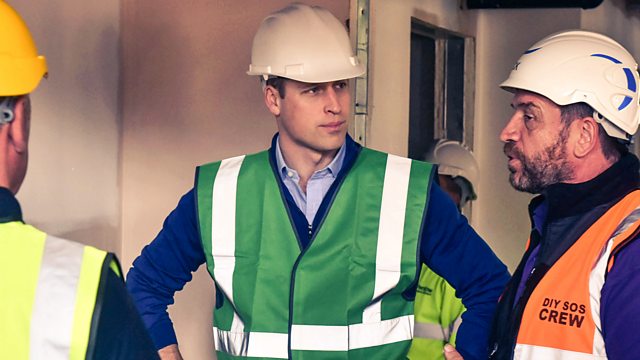 Nick Knowles and the DIY SOS team attempt to build a two-storey flexible-use centre that can be used by the Grenfell community however it decides.

The team attempt to build a two-storey flexible-use centre that can be used by the community however it decides. Research indicated that there wasn't enough low-cost space that different community groups could use in the area, so with the help of generous construction companies, suppliers and volunteers, the DIY SOS team attempt to do what they can to help.

The team are joined by the Duke of Cambridge, who previously helped out on another build in Manchester for veterans. The duke meets local residents and talks to firefighters who were among the first responders on the night of the tragic fire. Along the way, Nick meets different groups who could benefit from the building of a new community space.

Rosalyn and her family have lived on the Grenfell Tower estate since it was built in the 1970s. She runs a dominos club for West Indian pensioners that used to be on the estate. It's a vital community resource as it helps pensioners who might otherwise feel isolated come together, socialise, play games, eat and dance. Since the fire it's been left squatting in a children's nursery on weekends, but some of the pensioners can't access the site because of the steps down to it. The flexible large meeting space and cafe area might work for the group.

Nick also meets relatives of those who lost family in the fire, such as Nabil, who lost six members of his family. Nick discovers that there is a need for delivery of mental health services, something the smaller rooms in the centre could be used for.

This build was months in conception, planning and consultation with the community and was slated as a nine-week build from the ground up. The community centre proved tough to complete in the time. It provided many firsts for Nick and the team - the challenge of building under a motorway and using steel construction as well, and alongside the Dale Youth Boxing Club was the most ambitious and longest build the team have attempted.

The fire at Grenfell Tower moved people across the country, and thanks to the incredible generosity of building and engineering companies and suppliers and volunteers, there will be a new community space in the Grenfell area.