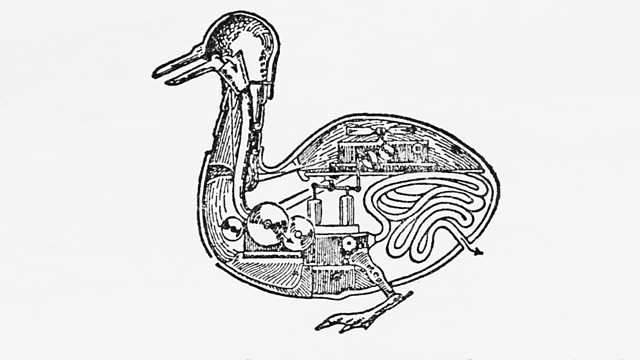 Melvyn Bragg and guests discuss the history of ideas about machines imitating living creatures, and the questions they raise about the differences between machinery and humanity.

Melvyn Bragg and guests discuss the history of real and imagined machines that appear to be living, and the questions they raise about life and creation. Even in myth they are made by humans, not born. The classical Greeks built some and designed others, but the knowledge of how to make automata and the principles behind them was lost in the Latin Christian West, remaining in the Greek-speaking and Arabic-speaking world. Western travellers to those regions struggled to explain what they saw, attributing magical powers. The advance of clockwork raised further questions about what was distinctly human, prompting Hobbes to argue that humans were sophisticated machines, an argument explored in the Enlightenment and beyond.

The image above is Jacques de Vaucanson's mechanical duck (1739), which picked up grain, digested and expelled it. If it looks like a duck...

Simon Schaffer
Professor of History of Science at Cambridge University

Franziska Kohlt at the University of Oxford

Jessica Riskin, The Restless Clock: A History of the Centuries-Long Argument Over What Makes Living Things Tick (University of Chicago Press, 2016)

Adelheid Voskuhl, Androids in the Enlightenment: Mechanics, Artisans, and Cultures of the Self (University of Chicago Press, 2013)