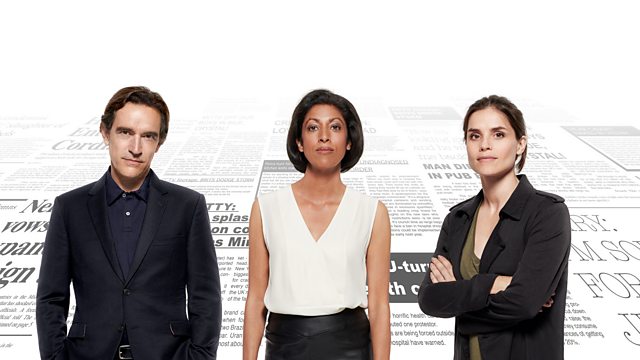 Drama series set in the world of newspaper publishing. The left-leaning broadsheet the Herald and the populist tabloid the Post compete for the news.

At the Herald, a left-leaning broadsheet struggling to adapt to the age of digital news, deputy news editor Holly Evans pursues a lead over the death of a young woman following a hit-and-run by a police car. When she learns that a nearby shop has already given its CCTV footage of the accident to the Post, a thriving populist tabloid sharing a building in the same square as the Herald, Holly approaches editor Duncan Allen and asks for the tapes. But Duncan still remembers an uncomplimentary article Holly once wrote about him.

At the Post, Oxford graduate Ed Washburn is given his first 'death knock', interviewing the parents of Shawn Kingsley, a footballer who has committed suicide. When details emerge about Kingsleys' private life that prompt his distraught parents to withdraw the interview, Ed comes under pressure to run the story against their will.

Duncan is delighted to be approached with compromising pictures of Carla Mason, a front-bench MP known for her feminist stance.

See all episodes from Press