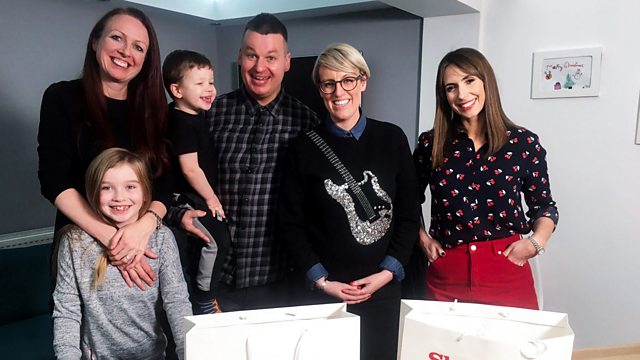 Alex Jones and Steph McGovern meet the Hurst family from Greater Manchester, whose high-end shopping habits are leaving a huge hole in their pockets.

Alex and Steph have their biggest challenge yet with the Hurst family from Greater Manchester, whose high-end shopping habits are leaving a huge hole in their pockets. But can Alex and Steph prove to them that paying the most doesn't always mean you've bought the best?

Loyal label lovers Tom and Jen Hurst are finding it hard to wean themselves off their expensive tastes, which were forged over years of living the high life - until their children came along. Sales manager Tom and sales executive Jen have recently reduced their working hours to spend more time with their children Scarlett, eight, and Charlie, three. They know they can't afford to keep up their expensive shopping sprees but are struggling to break their bad habits. Can Alex and Steph shock them into changing their ways and get them to reign in their spending?

To show them the error of their ways, when the family are out Alex and Steph take a sneaky peak around the Hursts' house and are shocked to find shopping receipts for over £1,000 and wardrobes packed with designer gear. To get them to face up to their expensive tastes, Alex and Steph build a surprise pop-up shop in their house with some of the family's biggest spends. Tom and Jen are shocked by how much they've spent, but it's clear Alex and Steph have their work cut out as Jen doesn't believe you can buy a dress for £20 and Tom appears reluctant to give up some of his high-end habits.

To help the family change their expensive ways, Alex and Steph set up their experiment, swapping the family's usual products for debranded substitutes to show them where they can spend less. The family have no idea what's been swapped and what hasn't, but will they be able to spot the difference with all the brands removed?

To help everyone budget better, Steph gives Jen and Tom some tips and tricks on how they can regularly save money each month. Alex and Steph also blind-test juicers and hair straighteners with the family to find out whether you need to pay a premium to get the best. The British public get their say too, as they scrutinise a range of debranded sunglasses and men's jackets, ranging from high-end to budget, to see whether as a nation we can tell what's pricey and what isn't when the branding is removed.

At the end of the experiment there are plenty of surprises when the Hursts find out what's been swapped and what hasn't, but can Alex and Steph convince them that quality doesn't have to cost a fortune and transform this family from spenders into savers?

See all episodes from Shop Well for Less