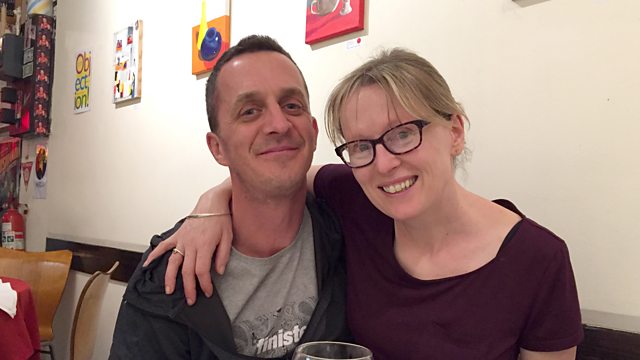 Clare Balding walks on Hergest Ridge in Herefordshire with Dr Kate Harding who has a moving story to tell.

Clare Balding walks on Hergest Ridge in Herefordshire with Dr. Kate Harding, who has a moving story to tell.

This is the second time Clare has walked with Kate. Their first ramble was around five years ago. The run-up to that recording had been stressful and Clare wasn't really up for it. She recalls - 'I was grumpy with the weather and grumpy with life. Not myself at all'.

However, when Kate and Clare started that walk, Clare realised it was what she needed most. Kate's advice about the power of mindfulness resonated strongly. It's an encounter that Clare has never forgotten.

Now, Clare is returning to Herefordshire to walk with Kate once more. However, Kate's circumstances have changed significantly. Last year, her husband killed himself. A consultant anaesthetist and specialist in intensive care, he had been suffering from crippling depression. Kate and her teenage children have, obviously, been left devastated. They had emigrated to New Zealand as a family of four. Shortly after Richard's suicide, they returned to Herefordshire, as three.

Since Richard's death, Kate has become determined to highlight the higher than average suicide rate amongst the medical profession, and would like to see a swifter process of complaint handling by the General Medical Council. This is why she's chosen to walk again with Clare; as well as to celebrate Richard's life by walking in one of the places he loved the most, Hergest Ridge, where his memorial was held.

Kate regards the openness and beauty of Herefordshire as something of a balm.

NB: If you are feeling emotionally distressed following this broadcast and would like details of organisations which offer advice and support, you can access this site: bbc.co.uk/actionline