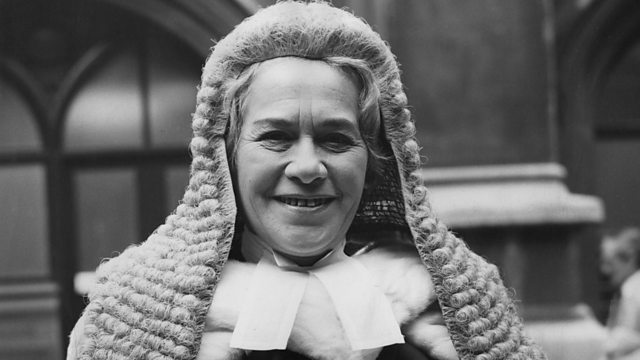 Cherie Blair's own law career was inspired by the barrister Rose Heilbron. She became a role model, and an example of what a Liverpool girl could achieve in law.

For Cherie Blair, leading barrister and QC, picking her great life was simple - her role model is Rose Heilbron, England's first woman judge.
When Cherie was growing up in Liverpool, Rose Heilbron was always the name that excited her grandmother the most. Rose was a barrister and when she was arguing a case before a jury in her home city, Cherie Blair's grandmother would follow her cases avidly, sometimes from the public gallery. Then she would come back and tell young Cherie all about what had gone on. And so Heilbron became a great example of what a Liverpool girl could achieve in the law.
And she had a remarkable career - first woman in silk, first to lead in a murder case, first woman treasurer of Gray's Inn.
Cherie is joined in the studio by Hilary Heilbron QC , daughter and the author of the biography: 'Rose Heilbron , Legal Pioneer of the 20th century'; plus Dr John Tribe - senior lecturer in law from the University of Liverpool.

The presenter is Matthew Parris and the producer is Perminder Khatkar.