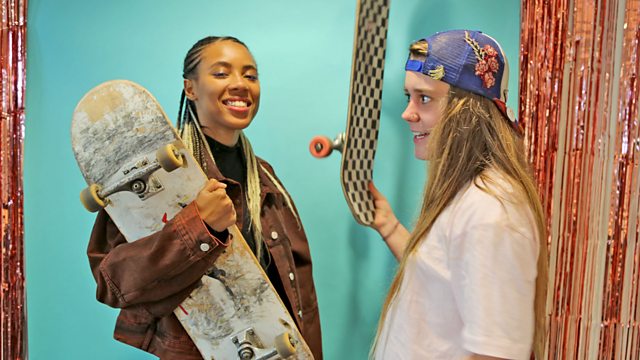 Two skaters talk about the film Skate Kitchen, how women are finding it difficult to access contraception, and Kate Atkinson on her new novel Transcription.

A new film Skate Kitchen tells the story of an all girl New York skateboard collective. We hear from two of the skaters Nina Moran and Dede Lovelace and from the film's director Crystal Moselle.

We discuss why women who want to use implants or the coil as a contraceptive are having trouble finding someone to fit them. Professor Helen Stokes-Lambard is the chair of the Royal College of GP's and Dr Katie Bramhall-Stainer discuss how cuts have affected the situation and Lisa Hardin tells us about her own experience of getting a coil fitted.

The best selling author Kate Atkinson tells us about her new novel Transcription.

When the American rapper Mac Miller died last week from an overdose his ex girlfriend Ariana Grande was bombarded with abuse and blame for his death. Why are some women held responsible for the recovery of their male partners? We hear from journalist Bolu Babalola and the executive director of Addaction Karen Tyrell.

Harriet Harman talks about improving the working lives of women MP's in her role as Mother of the House and why the next leader of the Labour Party has to be a woman.

The hashtag witchesofinstagram has more than one million tags on Instagram and is a huge subculture on social media. We discuss why with two women who describe themselves as witches Alicia and Antonina.

The artist Di Mainstone tells us how she can hear bridges sing. She has done projects on Brooklyn Bridge and Clifton Suspension bridge in the past. She tells us about her latest project at the Northern Spire Bridge in Sunderland, which involves unique musical instruments made from leftover bridge material.

'Twinning' with your children: Fun or Embarrassing?