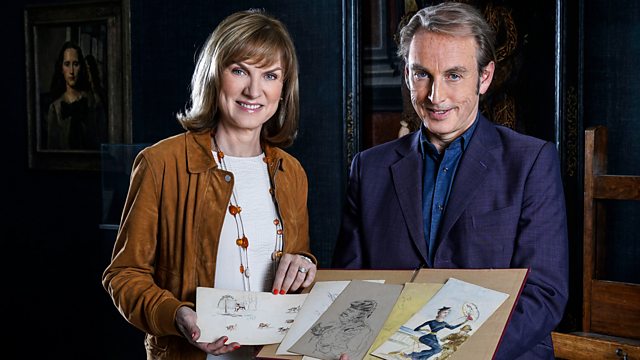 Fake or Fortune? Series 7
Episode 2 of 5

Art series with Fiona Bruce and Philip Mould. Fiona and Philip head to France to see if they can reverse an art world decision which one owner refuses to accept.

Fiona Bruce and Philip Mould head to France to take on a testing challenge - can they reverse an art world decision which one owner refuses to accept?

Two sketchbooks found in a garden shed in St Emilion were given to a teenage boy, Alain, by his grandmother back in 1965. Although she never revealed where they came from, they were thought to be the work of Henri de Toulouse-Lautrec, the aristocratic artist born in 1864 known for his atmospheric depictions of Parisian nightlife.

For Fiona and Philip, this is on one of their toughest investigations - if they are to prove the sketches are by Toulouse-Lautrec, they must not only discredit them as the work of Rene Princeteau but also persuade a respected committee to change their mind.

The sketchbooks are brimming with drawings - beautiful and characterful images of women, horses, sailors, soldiers and dogs. If they are the work of Toulouse-Lautrec, they are not the kind of images for which is he best known. Some of the pages are dated 1880, which would mean they are the work of the teenage Toulouse-Lautrec, and little is known about this period of his work.

In their quest, the team journey to the beautiful town of Albi in southern France, where Toulouse-Lautrec was born, and visit the grand family home, Chateau du Bosc, where the artist spent much of his youth. With so little evidence to go on, Fiona and Philip scour the rooms for clues that might link the life of Toulouse-Lautrec to drawings in Alain's sketchbooks.

Technical analysis is also vital, but Fiona and Philip are still piecing together their scientific evidence when the Toulouse-Lautrec committee announces that it's meeting - soon. It's a deadline they can't miss, but can they put together a compelling case in time?

See all clips from Toulouse-Lautrec (2)