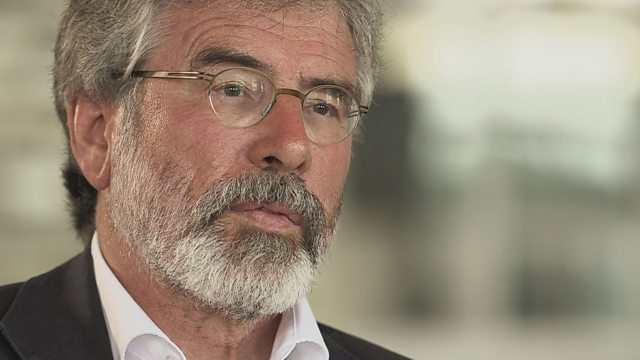 On its 30th anniversary, Stephen Nolan tells the story of the Sinn Fein broadcasting ban through the eyes of the actors who became its unexpected stars.

Thirty years ago the British government took an almost unprecedented decision - to ban the voices of Sinn Fein and other groups in Northern Ireland associated with terrorism from being heard on television and radio.

The Belfast based broadcaster Stephen Nolan tells that story.

He starts by tracing how Sinn Fein, who at the time were seen as the political wing of the IRA, turned themselves into a democratically elected party. This meant that broadcasting organisations like the BBC started to interview their leaders like Gerry Adams on the nightly news. But Margaret Thatcher hated the IRA and did not want to see people like Adams on her television screen. After the murder of her friend Airey Neave and the IRA's attempt to blow her up at the Conservative Party Conference in Brighton in 1985, she gave a speech setting out her view that terrorists should be denied the oxygen of publicity and not allowed on broadcast platforms like the BBC.

So, after a spate of violence in 1987 and 1988, the government decided it was time to ban the voices of people associated with terrorism in Northern Ireland from British airwaves.

What made the ban unique was that journalists like Denis Murray, the BBC's Ireland correspondent at the time, could still go and interview Gerry Adams - they just couldn't use his voice on the news. Instead, a group of young actors just out of Belfast's drama schools were suddenly handed one of the most bizarre roles of their career.