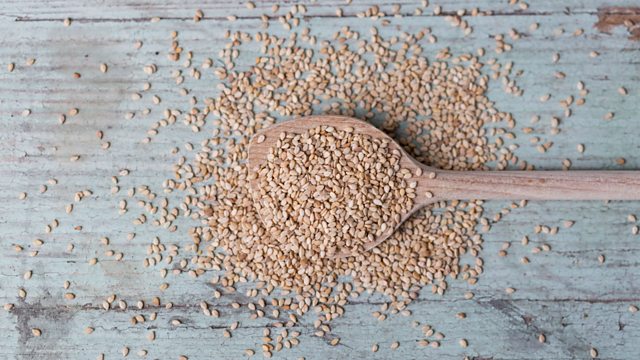 Dan Saladino and food historian Polly Russell share stories of seeds as told at this year's Oxford Symposium on Food and Cookery. From the link between amaranth and cannibalism to edible acorns.

Founded in 1981 the Symposium takes a theme and invites scientists, anthropologists, historians, cooks and food enthusiasts to deliver papers and share experiences on the topic. This year they chose one of the biggest subjects possible, seeds.

Using the Oxford Botanic Garden's "Plants That Changed The World" display as their backdrop, Dan and Polly have selected six speakers to provide insight into the past, present and future of seeds, from politics to pleasure and from culture to cooking.

Professor Simon Hiscock, Director of The Oxford Botanic Garden, starts of by explaining what a seed is and when they first appeared in earth history. Over millions of years biodiversity has meant we've so far identified 400,000 different plants. Elinor Breman of Kew's Millennium Seed Bank explains why a team of seed hunters have been travelling to the most remote parts of the world in search of seeds. As Elinor explains, a fifth of these seeds are at risk of becoming extinct and need to be stored safely for the future.

All seeds have a story to tell and one of the most intriguing (and disturbing) is told by food historian David Sutton, "Amaranth: Food of the Gods, or Seed of the Devil?".

Meanwhile Steve Jones of the Washington Bread Lab describes his efforts to bring deliciousness back to wheat.