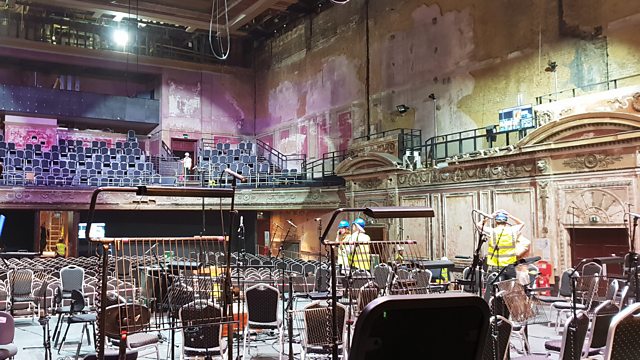 Proms at Alexandra Palace in the newly restored theatre that has been closed 80 years, Joanne Harris and Natalie Haynes on myths as inspiration, and the Venice Film Festival.

After a devastating fire at the newly-opened Alexandra Palace in London in 1873, a new building was designed and built which included an elaborate and elegant theatre, and the opening concert was of the early Gilbert & Sullivan operetta, Trial by Jury. The theatre hasn't been used as a performance space for 80 years, but tomorrow the BBC Proms will be broadcast live from the newly-restored space in all its faded grandeur, featuring the very same operetta. Alexandra Palace's Emma Dagnes and conductor Jane Glover discuss the challenge and the thrill of bringing music back to this forgotten venue.

Jason Solomons is at the Venice Film Festival as the latest remake of A Star is Born with Lady Gaga premieres. He'll have all the news of much-anticipated films and performances including Olivia Colman in The Favourite, already getting Oscar buzz.

Continuing Front Row's Inspire season we ask novelists Joanne Harris and Natalie Haynes what is it about myths and legends from across the world that provide such an enduring source of inspiration for writers and readers alike. Whether it be the ancient Greeks and Romans, the Norse myths or classic Hindu texts that have been re-told and re-interpreted down the centuries, what makes their unique fascination for each successive generation?

Find out more about her Norse books.