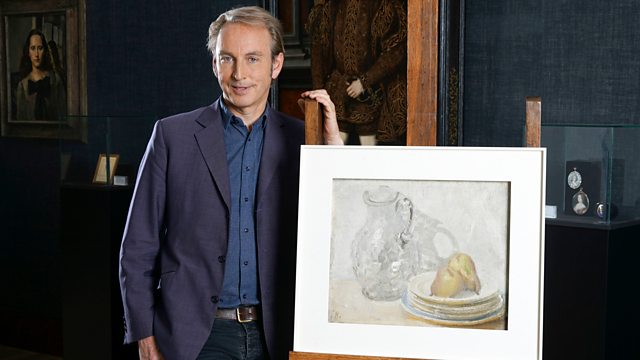 Fake or Fortune? Series 7
Episode 1 of 5

Art series with Fiona Bruce and Philip Mould. Can the team prove that a still life of a glass jug and pears is the work of celebrated British artist William Nicholson?

Can the team prove that a beautiful still life of a glass jug and pears is the work of celebrated British artist William Nicholson?

The investigation began when viewer Lyn got in touch to ask for our help - a painting she owns recently suffered a fatal blow when it was rejected by the leading authority on William Nicholson and was left out of the artist's latest catalogue raisonnee - the official list of all his known works. Lyn bought the paining in 2006 for £165,000, believing it to be a genuine Nicholson, but now it's worth practically nothing. However, this damning ruling has divided art world opinion. Can Fiona Bruce and Philip Mould uncover enough new evidence to convince sceptics that this is a genuine Nicholson?

William Nicholson was one of the leading British artists of his generation. Born in 1872, he began his career as a graphic artist before forging success as a painter. Over five decades he created nearly 900 oil paintings from informal portraits to haunting landscapes, but it's his exquisite still lifes which are most admired. In the years after his death, William Nicholson was overshadowed by his more famous son, the abstract artist Ben Nicholson, but today his work is highly prized, often reaching six-figure sums. This programme has a highly personal element - Lyn grew to love Nicholson through her aunt, Lillian Browse, who was a legend in the art world and one of the first female art dealers. It was just a few months after her aunt's death that Lyn bought the picture from her gallery. Lillian Browse was renowned for her knowledge of William Nicholson, having published the first catalogue raisonnee in 1956.

For Lyn, this is as much about justice for her aunt - would she really have had a fake Nicholson in her gallery? - as a fight for the painting she loves and the money she's lost. Fiona and Philip build up a detailed forensic case, starting with a lucky find - Nicholson's very own paintbox, kept in William Nicholson's grandson's house. It's a gift for scientific analysis, but will paint samples from the painting match those from Nicholson's own paintbox? The back of the painting reveals more clues with handwriting that can be compared to letters written by Nicholson, and an x-ray shows there's more to this painting than first meets the eye.

As the team delve back into the provenance of the painting, they come across an alarming find - could this painting have been involved in one of the great art crimes of the 20th century? Fiona meets reformed art forger John Myatt to find out if he ever faked a Nicholson. In a final bid to put the name Nicholson to this painting, Philip travels to Canada, where he compares the painting to a very similar Nicholson painting of a glass jug and pears. Could this painting hold the key to authenticating Lyn's? A compelling forensic case is pieced together, but is it enough? Will Lyn get justice for her painting?

See all clips from Nicholson (3)