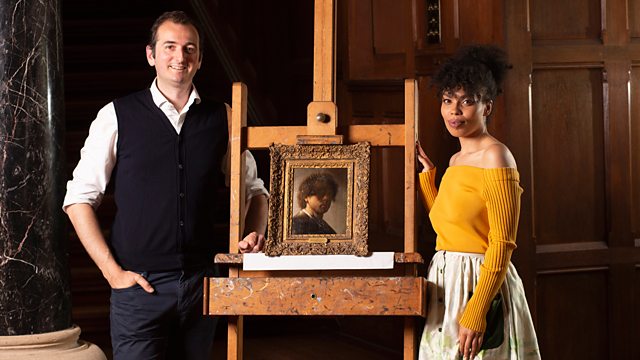 Dr Bendor Grosvenor and social historian Emma Dabiri travel to Tiverton in Devon to investigate a portrait of Rembrandt in the collection of Knightshayes Court.

In Knightshayes Court Devon the team are examining a work that is a copy of a Rembrandt. But, might it be the real thing, a genuine self-portrait?

Bendor discovers a small portrait of Rembrandt in the collection of a National Trust house, Knightshayes Court in Tiverton, Devon. The painting is thought to be a later copy of a self-portrait by Rembrandt now in the Rijksmuseum in Amsterdam, but Bendor believes it is in fact a study for the finished picture by Rembrandt himself. There is a third version in a collection in Germany that was always thought to be the original until the Amsterdam version was found in a Glasgow attic in 1959.

The picture is sent to be restored and have a later background overpaint removed while Bendor sets out to see all three versions and in the process visits the world-expert on Rembrandt, Ernst van de Wettering, in Amsterdam. But Ernst is not persuaded by the painting. Bendor decides to try and use scientific investigation to prove the portrait is not a later copy.

Emma explores the history of the house and its eccentric opium smoking Victorian Gothic architect, William Burges. She investigates the history of the lace factory in the town of Tiverton on which the family fortune was based, and tries her hand at golf, as the last family member in the house was British Ladies Golf Champion five times in the 1920s.

See all clips from Devon (2)