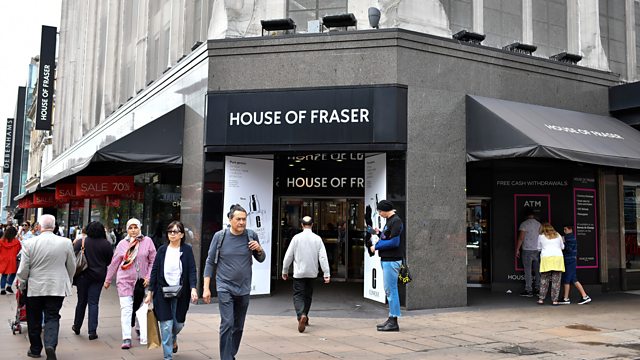 Have you booked your holiday for 2019 yet?

Reaction to the news that House of Fraser's flagship Oxford Street store will now stay open after the chain's new owner agreed revised terms with its landlord.
The store had been due to close under a restructuring plan that House of Fraser announced in June. However, the department store group fell into administration earlier this month, and was bought by Mike Ashley's Sports Direct. His plan is to keep 80% of House of Fraser's 59 stores across the UK open. A spokesperson said they were working through the list on "a store-by-store basis".

We'll hear from the Ryanair passengers who received compensation for cancelled and delayed flights but have been charged extra fees after banks rejected the cheques. A number of people said their bank had returned cheques they had received from the airline because they were unsigned.
One passenger, who waited 11 months for compensation, said she was now worse off after the bank added a fee of 20 euros.
Ryanair has apologised and blamed an "administrative error".

And we'll look at why bookings for UK holiday lets for 2019 are up by as much as 50 percent.
Some of the UK's biggest companies - who advertise thousands of properties between them - are reporting increases compared to the same time last year. It's being put down in part to the good weather earlier in the summer. We'll be Tenby in Wales to find out why.

Call You and Yours: Have you been chased by debt collectors? How did you cope?