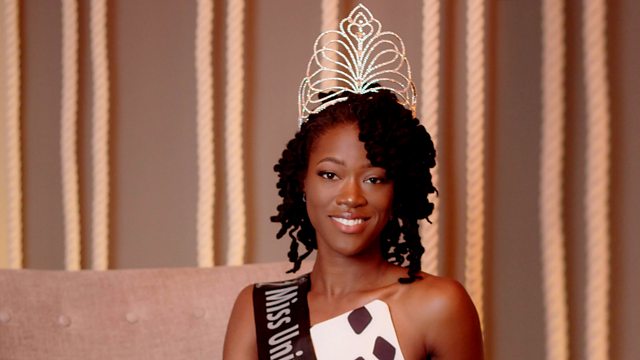 Dee-Ann Kentish-Rogers on being the first black Miss Universe Great Britain, Chloe Grace Moretz on The Miseducation of Cameron Post, and women detained under the Mental Health Act.

Chloë Grace Moretz is only 21 but has over 40 film credits to her name and has worked alongside stars such as Martin Scorsese, Julianne Moore, Jonny Depp, Juliette Binoche, Denzel Washington, Michelle Pfeiffer & Nicholas Cage. She was 5-years old when she was cast in her first film and became a household name when she played the violent and rather sweary tweenager in the controversial film Kick-Ass. Her latest film, The Miseducation of Cameron Post, won the Grand Jury Prize at The Sundance Festival. She plays Cameron, a lesbian teenager forced to attend a gay conversion camp. Jenni asks her why she wanted to be a part of this coming-of age story.

Women and girls detained under the Mental Health Act are taking their lives at "appalling" rates, according to a report from Agenda, the alliance for women and girls at risk. Jenni talks to their Chief Executive Katharine Sacks-Jones about what changes they would like to see put in place to protect them and Joy Hibbins who has experienced being sectioned and is the founder of the charity Suicide Crisis.

Dee-Ann Kentish-Rogers will be the first black woman to represent Great Britain in the Miss Universe pageant in over 20-years. A newly qualified lawyer and former Commonwealth athlete, she will represent Britain in the final in December. Dee-Ann speaks to Jenni about the significance of her win and how she wants to inspire other young women of colour.

A quarter of school age children have never been taken for a sight test by their parents, according to a survey by the Association of Optometrists. Children are developing permanent vision problems because they are not being diagnosed early enough. Just over half of parents mistakenly believe that their children get eye tests automatically at school. Jenni speaks to Farah Topia, Clinical Advisor for the Association of Optometrists.