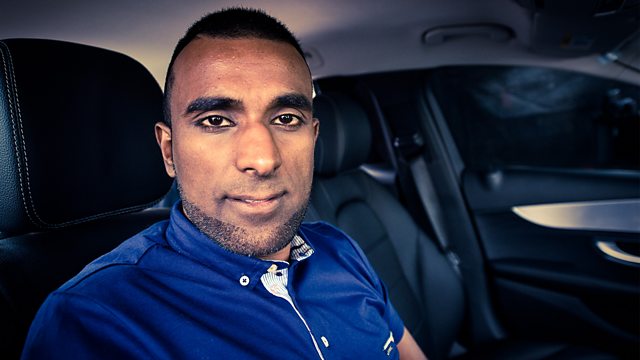 A surprising journey through Middlesbrough, in and out of the cabs of three very different drivers, penned by cabbie turned writer Ishy Din and starring local non-actors.

A surprising journey through Middlesbrough, in and out of the cabs of three very different drivers - a young British-Pakistani entrepreneur who believes that immigrants have always been enterprising by nature, a local man who used to work in construction on towering glass buildings down south and an older seasoned driver who is in love with his job... until the day he falls out of it. Their stories uncover what lies beneath the surface of a post-industrial northern town and unfold into a state-of-the-nation tale.

The show stars three local taxi drivers from Middlesbrough and features a supporting cast of Tees Valley locals - all of whom are non-actors. Taxi Tales is part of the Performance Live strand - a partnership between BBC Arts, Arts Council England and Battersea Arts Centre, showcasing some of the most exciting artists working in performance today.

Originally a piece of theatre set in cabs where the passengers were the audience, the show is written and presented by Middlesbrough taxi driver turned playwright/screenwriter Ishy Din, directed by Bafta winner Ben Anthony and produced by Tamasha Theatre Company.

'For us the most exciting thing about being part of Performance Live is the groundbreaking nature of the two disciplines of theatre and television coming together to think about producing something in a new way - a TV show that goes beyond simple capture of theatrical performance and recreates and re-imagines it for the small screen. Taxi Tales delves under the surface of a city in the UK and dramatises it in a way that, we hope, will be fresh and revealing for TV audiences.' - Tamasha

Tamasha is Britain's leading touring theatre company producing critically acclaimed plays that put diverse artists centre-stage. During their 30-year history successes like East Is East, Snookered and Made in India have won acclaim from critics and audiences alike.

Touretteshero: Me, My Mouth and I

See all clips from Taxi Tales (3)