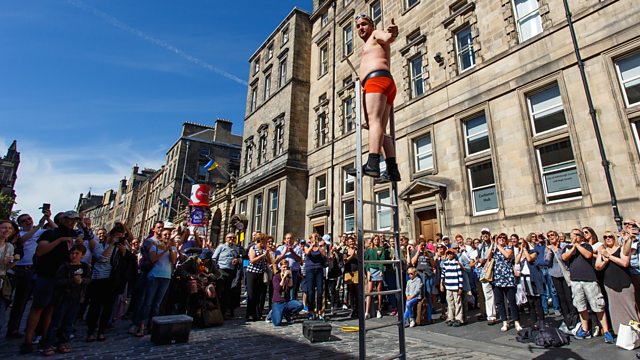 It's a dreich August morning during Edinburgh Festival and a student is home for summer, handing out flyers. An original short work for radio by writer-performer Kieran Hurley.

It's a dreich August morning during Edinburgh Festival and a 22 year-old student is home for summer, handing out flyers.

What does it feel like to have your home town turned into a stand-up comedy theme park for tourists every August? Edinburgh is an original short work for radio written and performed by Kieran Hurley. It's a story of soggy flyers, disappointing encounters and splitting headaches. It's also about that transient moment when teenage memories and adult hopes are as raw as each other.

Kieran Hurley is a writer, performer and theatre maker based in Glasgow. His Fringe First-winning play Heads Up won Best New Play at the Critics' Awards 2017 for Theatre in Scotland. Other plays include Rantin: a ceilidh-play with music; Hitch: an autobiographical story with a live band, and Beats: a monologue performed with a DJ, which is currently being adapted into a screenplay.

Written and performed by Kieran Hurley.
Produced by Eliza Lomas.