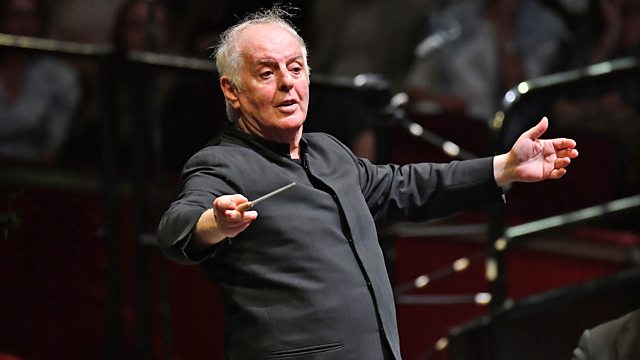 8.05pm
Interval Proms Plus: BBC New Generation Thinker Hetta Howes and philosopher Mark Vernon compare figures from the past and present who have searched for a sense of transcendence and experienced ecstatic states. Hosted by Christopher Harding.

Alexander Scriabin: The Poem of Ecstasy

Daniel Barenboim and his pioneering West-Eastern Divan Orchestra return to the Proms for a concert marrying passion and politics.

One of the most richly Romantic works in the repertoire - Tchaikovsky's heart-rending Violin Concerto, performed here by Georgian violinist Lisa Batiashvili - is paired with Scriabin's ecstatic, orgiastic 'The Poem of Ecstasy', an attempt to bridge the divide between spirituality and sexuality in music.

At the centre of the concert is David Robert Coleman's 'Looking for Palestine' for soprano and orchestra, a work commissioned by the ensemble, and one that speaks to its uniquely political identity.