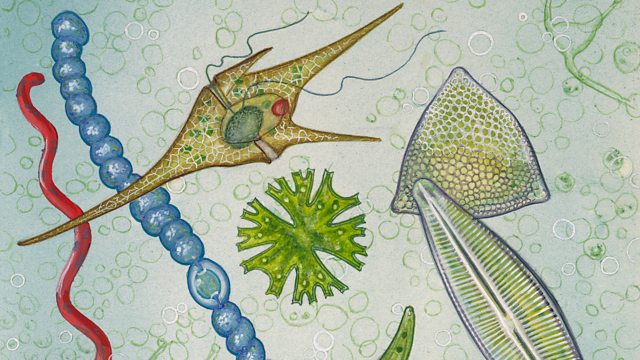 Poetry, prose and music inspired by the world opened up by microscopy, from fleas to micro-organisms. With Rachael Stirling and Paul Bentall.

With Rachael Stirling and Paul Bentall. Poetry, prose and music on the world opened up by microscopy, from fleas to micro-organisms. A full list of the readings and music can be found on the Words and Music programme website.

Microscopes are devices for looking beyond immediate appearances to find the truth. So a programme about microscopes could include material exploring how truth is elusive, non-obvious, problematic. The most obvious examples of explorations of this theme here come from John Donne and Emily Dickinson, and also from Democritus, who opens the programme. His words are accompanied by a piece of 'music' devised by scientists working at the Large Hadron Collider in Switzerland, who've written an algorithm that converts results obtained by the Collider into musical notes.

More immediately, there is some great writing from the 17th century that captures the thrill of discovery that surrounded the first systematic use of microscopes - represented here by Francis Bacon, Anton van Leeuwenhoek, and Henry Power. The sense that a new world was being opened up is so palpable in these writings that the use of music from Haydn's operetta The World on the Moon, and Gorecki's Copernicus Symphony, seemed quite appropriate. The microcosm and the macrocosm are internally related, after all, and this is an idea explored in some of the more recent poets sampled here: Ruth Padel and Miroslav Holub both see the wider universe when they look through a microscope.

Beautiful World, Where Are You?