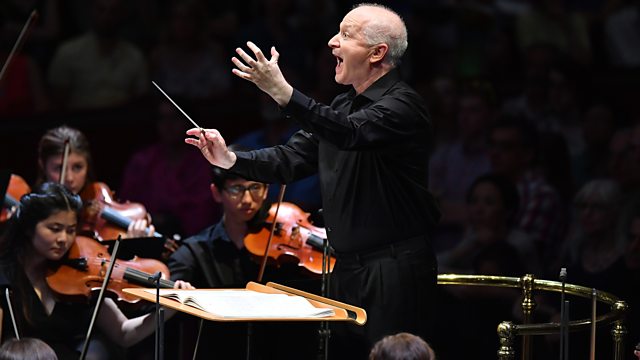 Live at the BBC Proms: The National Youth Orchestra under George Benjamin with pianist Tamara Stefanovich with music by Mussorgsky, Benjamin, Ravel, Ligeti and Debussy.

c.8.20
During the interval, Tom Redmond is joined live by members of the National Youth Orchestra and tonight's soloist, Tamara Stefanovich, and finds out about some of the NYO's activities behind the scenes. Tom also gets some reaction to tonight's Prom from the ex-NYO and now Berlin Philharmonic horn player, Sarah Willis.

The National Youth Orchestra of Great Britain return to conjure a series of vivid worlds, both real and imagined.

The sea roars and shimmers in Debussy's La mer, Mussorgsky paints eerie visions of a Witches' Sabbath, while Ligeti's Lontano summons the 'dream worlds of childhood'.

Ravel's brooding Concerto for the Left Hand was commissioned by a pianist who lost an arm in the First World War.