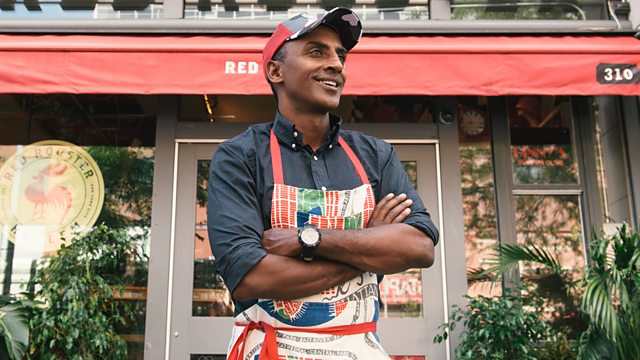 Keep It Sticky: The Extraordinary Story of Chef Marcus Samuelsson.

Harlem-based chef Marcus Samuelsson tells his personal food story, which took him from Ethiopia and Sweden and onto New York City and from being an orphan to an award-winning chef.

Harlem based chef Marcus Samuelsson was born in Ethiopia, adopted in Sweden and made his reputation in New York City. He tells Dan Saladino his extraordinary story through food. The third of The Food Programme's 2018 season of African food stories.

Marcus's restaurant, The Red Rooster is part of a success story that has seen the 46 year old chef become a major television personality, a cook for Presidents and a major influence of the food scene in the US. But on the restaurant's menu, if you know the story behind some of the delicious dishes, an incredible life story is also being told.

A pasta dish from Ethiopia captures an early life being born in a mud hut in a tiny east African village where everyone had berbere spice, coffee and the grain tef in their store cupboards. This was the world Marcus left at age of two after he, his sister and mother contracted TB and had to make a 70 mile trek to a hospital in the capital Addis Ababa. Macus and his sister survived, their mother died.

They were adopted by a Swedish couple, and Marcus grew up with two passions, football and food. His grandmother Helga taught him to cook and forage. This is why on the menu of his Harlem restaurant is a dish called Helga's meatballs.

After a brutal apprenticeship and training in restaurants across Europe, Marcus travelled to New York City, narrowly missed being caught up in the attack on the Twin Towers and 9/11 and realised his life had to take a different path. That's why he ended up in Harlem.

Presented and presented by Dan Saladino.