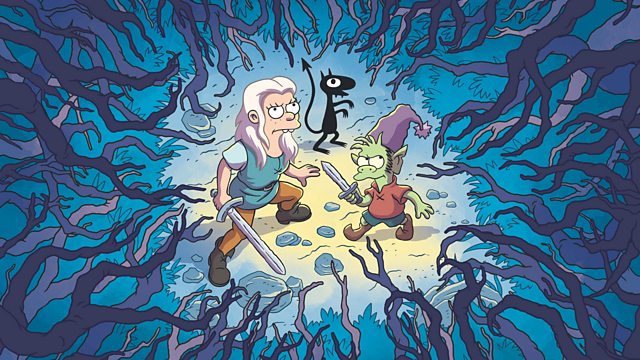 We review Disenchantment the new animated series set in a fantastical medieval world from The Simpsons creator Matt Groening.

Alan Garner's debut novel, The Weirdstone of Brisingamen, is regarded as one of the great 20th century works of children's literature. It was inspired by the Cheshire landscape he grew up in, like many of his other novels like The Owl Service. His new memoir, Where Shall We Run To?, is a series of recollections of his wartime childhood but it's far from nostalgic.

The Oscars have just announced the introduction of a new award category for outstanding achievement in popular film, making superhero films like Black Panther more likely to win an Oscar. Film critic Anna Smith comes into talk about the repercussions.

Plus author and creative expert Dave Birss gives us his tips and tricks on how to improve our creativity.

Image to the left: Escape from Dreamland - Bean with Luci and Elfo.

Where Shall We Run To: A Memoir by Alan Garner is out now in hardback, paperback, as an audio download and as an eBook.

Image: Alan Garner as a 6-year-old.

Image credit: Provided by the author.