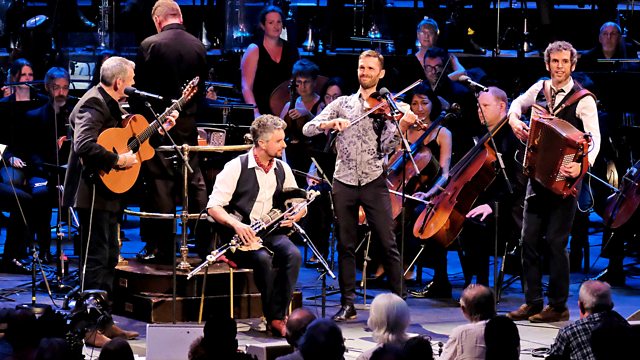 Interval: Proms Plus:
Gillian Clarke is a former National Poet of Wales and winner of the Queen's Medal for Poetry. New Generation Thinker Dr Peter Mackay is from the Island of Lewis and an expert in Scots and Irish poetry. They discuss the folklore and oral traditions that have entertained and educated adults and children in these islands throughout millennia. Presented by New Generation Thinker Corin Throsby.

In a Prom that celebrates the history and evolution of the folk music scene in Britain and Ireland, the BBC Concert Orchestra collaborates with some of the folk world's leading musicians who are pushing the boundaries of traditional music, and bringing with them a new breed of folk fan.

With performers from England, Scotland, Wales and Ireland, this Prom reflects the diversity of a genre of music that, while steeped in tradition, is constantly evolving and reinventing itself through the generations.