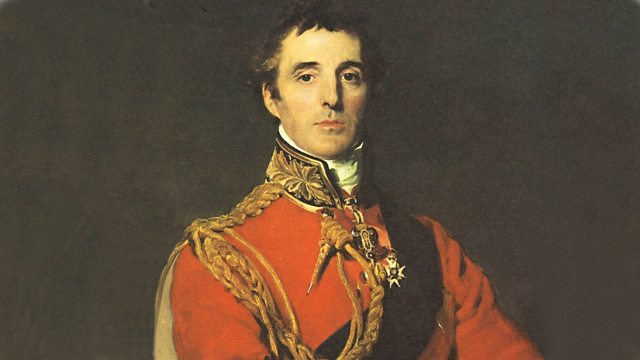 The Duke of Wellington's Boots

David Cannadine meets the present Duke of Wellington to explore how his ancestor's utilitarian boots came to define his military and political leadership.

David Cannadine returns with five more programmes examining the careers of British Prime Ministers through their props of power. From the Duke of Wellington's boot to Mrs Thatcher's handbag, he explores political fame and image through the way in which an object or prop can come to define a political leader.

When the Duke of Wellington died, his horse carried a pair of his boots the reverse way around in the stirrups at the end of his funeral procession. The sight of these boots brought tears to the eyes of the thousands of mourners at his state funeral. The Duke became associated with his boots after he wrote to his boot maker from the Iberian Peninsula to request he made shorter boots without a tassel, which fitted under trousers, because the Duke tended to wear civilian dress while on campaign.

David Cannadine meets the present Duke of Wellington to explore how his ancestor's utilitarian boots quickly caught on with patriotic British gentlemen, eager to emulate their war hero. But Wellington's boots were turned against him during his premiership by his enemies, who characterised him as a military despot, complete with jackboots and spurs.

The Duke's eponymous footwear were revived again in the aftermath of the First World War, when Wellingtons reappeared in a new guise as our more familiar and much loved 'wellies' - no longer made of leather, but of rubber.

Readings by Ewan Bailey and Will Huggins