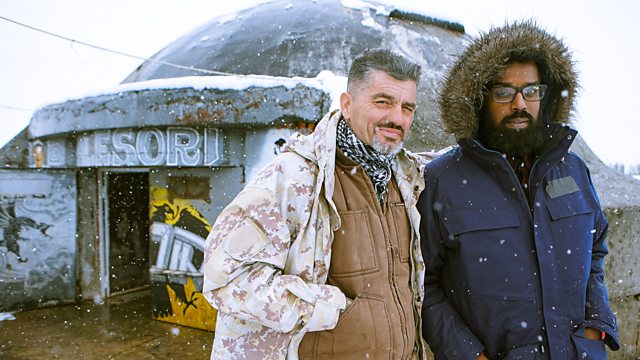 The Misadventures of Romesh Ranganathan Series 1
Episode 3 of 3

Comedian Romesh Ranganathan travels to Albania to get an insider's guide to the country and to find out whether his own preconceptions about the Eastern European outpost are right.

Comedian Romesh Ranganathan travels to Albania to get an insider's guide to the country and to find out whether his own preconceptions about the Eastern European outpost are right. From a brief glance at an atlas, Albania has everything - beaches on the same coastline as Greece and Croatia, hills to trek in and stunning mountains. But for some reason all the average Brit knows about Albania is the old black and white clips from the communist era - and most of those have been mistaken for clips shot in Moscow.

On arrival, Romesh does indeed discover a country that is bleak and miserable, but then again it is raining, and even his native Crawley seems a bit lacklustre in the rain. Guided by local TV presenter and journalist Erjona Rusi, Romesh is taken on a whistle-stop tour of the country. He visits the beaches (apparently stunning in the summer, but when Ramesh arrives it is -10 degrees) and is hosted on a unique homestay in a beautiful isolated shepherd's village, where he is sent out on overnight wolf patrol and then embarks on a treacherous seven-hour journey into the mountains.

Along the way, Romesh tries to discover why Albania has remained a stubbornly unfashionable holiday destination, while many other formerly communist nations have leapt ahead. Romesh meets those at the extremes of this unique country, from the rural farmers to the billionaire playboys who live in the cities next to supermodels. He ends up with sheep poo mysteriously smeared across his back and, in a move he will doubtless come to regret, a tattoo emblazoned across his forearm. He finds a people desperate to throw off their reputation as the home of eastern mafia gangs, lots of Raki and a level of hospitality that he describes as 'second to none' as he gets an insider's guide to Albania.