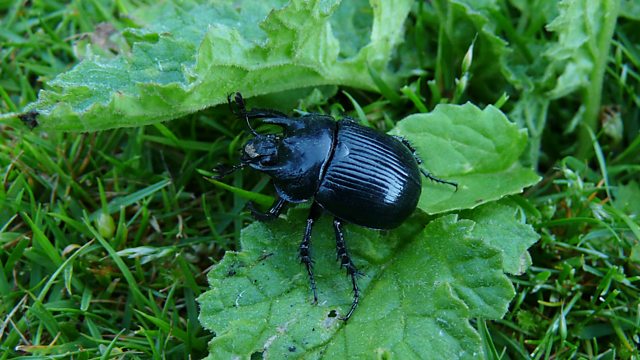 Brett Westwood explores how our idea of the dung beetle has shifted from sacred symbol to filthiest vermin, the butt of the joke... and back to sacred again.

Brett Westwood explores how our idea of the dung beetle has morphed over the ages.

The most sacred symbol in Egyptian ideology, the scarab beetle was also the butt of Classical Greek jokes, the inspiration for anti-conceptual art, the go-to filthy vermin for use in moralising fables and more recently the source of celestial wonder for poets.

Brett visits an enormous scarab sculpture at the British museum with entomologist Richard Jones, who has brought along his collection of favourite shiny bugs. Biologist and cartoonist Jay Hosler explains why his character Sisyphus is the wisest creature in his graphic novel Clan Apis. Dr Rachel Murray from the University of Bristol reveals the entomologist Fabre's influence on DH Lawrence's Ladybird. Producer Simon Bell explains just how much baby elephant manure it takes to film a dung beetle and Billy Childish revels in the elementary appeal of a creature that sculpts, rolls, battles over and eats poo.