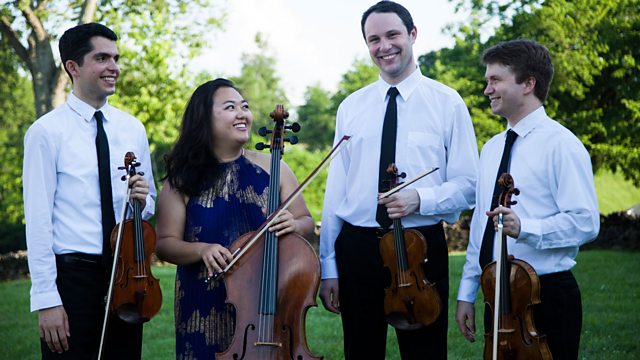 Kate Molleson celebrates the music-making of the BBC's New Generation Artists. Stars of the future caught by the BBC microphones as they embark on international careers.

Kate Molleson celebrates the music making of the current BBC New Generation Artists. Over the Proms season, there'll be many opportunities to hear a starry line-up of musicians caught by the BBC microphones as they embark on glittering international careers. In eight Saturday programmes we hear from the current line-up of NGAs starting today with a programme which includes two artists who will be appearing at the Proms; the New York-based Calidore Quartet bring their elegance to Beethoven and bass-baritone Ashley Riches who turns in a suave poacher in a traditional song from Lincolnshire. Also today, the brilliant Misha Mullov-Abbado Group rework a Brazilian classic and Georgian pianist Mariam Batsashvili gets to the musical heart of a dazzling Hungarian dance in a performance she gave earlier in the year at the new Birmingham Conservatoire.

For nearly two decades, the Radio 3 New Generation Artist Scheme has nurtured the talents of some of the world's finest instrumentalists, chamber ensembles and singers at the outset of their international careers. Each year, six or seven young musicians are offered a two year platform on which to develop their solo and chamber music careers. This includes studio recordings, engagements with the BBC Orchestras and a raft of engagements at some of the UK's leading Festivals including the BBC Proms, Bath, Cheltenham and Edinburgh Festivals among many others.