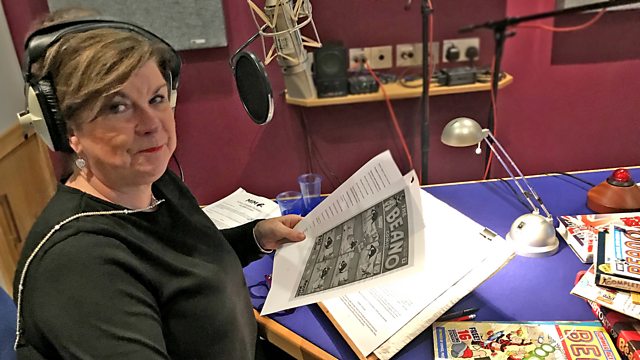 As the Beano prepares to celebrate 80 years of comic fun, Elaine C Smith remembers its naughty sibling The Dandy, which was created by Dundee company DC Thomson in 1937.

As the Beano prepares to celebrate 80 years of comic fun, Two Doors Down star Elaine C Smith remembers its naughty older sibling The Dandy which was created by Dundee company DC Thomson in 1937.

Elaine who grew up reading both comics charts the history of The Dandy and the creation of famous characters like Desperate Dan, Winker Watson, Keyhole Kate, Biffo the Bear and The Numskulls.

By the 1950s, The Dandy was selling millions of copies a week to children all over the UK and the world and here Elaine is joined by Glasgow historian John McShane as well as many of the writers and artists who worked on the landmark children's comic. She recalls being fascinated by Keyhole Kate and hears from Ex-Dandy editor and writer Iain McLaughlin about his memories of writing for the iconic characters Desperate Dan, Korky the Cat and Bananaman.

Comedian and actor Bill Oddie remembers reading the comic as a child and also doing some of the voices for the Bananaman TV series, collectable comics expert Malcolm Phillips recalls the sale of a Dandy Issue 1 for a huge sum and writer Nigel Auchterlonie talks about the final print issue of The Dandy where Korky the Cat makes a surprise return.

Managing editor of Beano Studios Craig Graham talks about his time as Dandy editor, the future of the comic in annual form, and why it went through so many changes from 2006 until 2012 when the final print issue was published.

A Comic Celebration: The Dandy is an MIM Production for BBC Radio Scotland.

See all episodes from A Comic Celebration