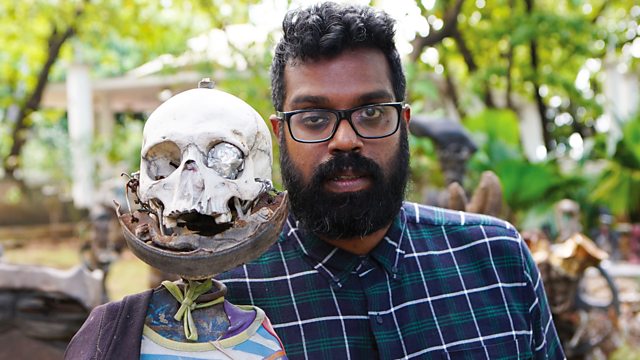 The Misadventures of Romesh Ranganathan Series 1
Episode 1 of 3

Romesh Ranganathan travels to some of the most unlikely places on earth for a holiday. Romesh finds out if there is more to Haiti than the sensational headlines on the news.

Romesh Ranganathan is a comedian and TV presenter whose idea of a nice trip away is two weeks in the Algarve. In this three-part series, he is travelling way beyond his comfort zone and the world of complimentary breakfast buffets to some of the most unlikely places on earth for a holiday. Hosted by locals and fully immersed in the local culture, Romesh gets an eye-opening, and at times heart-stopping, insider's guide to countries that are big on natural beauty, character and charm.

In this first episode, Romesh gets an insider's guide to Haiti to find out if his preconceptions about the Caribbean island are right, or if there is more to the country than the sensational headlines he has seen on the news. Everything Romesh has ever heard about Haiti has been negative. They had a dictator who terrorised the island, a 2010 earthquake that crippled the country and then a devastating hurricane. That is all before President Trump called it something unmentionable. But are all the bad news reports fair? Does Haiti deserve its reputation? Haiti is in the middle of the Caribbean, surrounded by Cuba, Jamaica and the Dominican Republic. It should be a paradise, so why doesn't anyone go there?

To find out, Romesh Ranganathan, comedian and coward, is travelling across the Atlantic to spend a week in the country. This isn't his typical holiday destination - Romesh's idea of a perfect holiday is a week in Spain. He avoids 'culture' and he rarely leaves the comfort of the hotel swimming pool. In almost every conceivable way he is the wrong person to send, except one - he is honest. Landing in the Haitian capital Port au Prince, Romesh sets to work getting to grips with a country that - arguably more than any other - has suffered from a bad reputation. Guided by his host - Peabody award-winning journalist Jeremy Dupin - Rom throws himself into Haitian life. It is a chaotic journey that will take him from the iron market to vodou ceremonies, from cathedrals destroyed by the earthquake to the slums.

So has the world got it wrong about Haiti? Romesh sets off to find out.