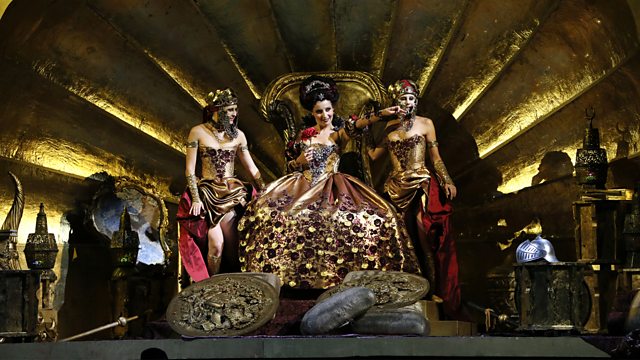 Based on the epic poem by Ludovico Ariosto and with a libretto by Grazio Braccioli, Vivaldi's three act opera centres around a malicious sorceress, Alcina, and the wicked confusion she creates on her magic island. It is tour de force for the cast of singers and a production is a must see for lovers of baroque opera. This recording, made at the atmospheric Palazzo Ducale, in Martina Franca, in southern Italy, was given as part of the Festival della Valle d'Itria before the production was transferred with great acclaim to Vivaldi's home city of Venice.

Act 1
In a delightful garden in which two springs are seen, Medoro escapes from a shipwreck into the arms of his beloved Angelica. Alcina magically helps Medoro and he recounts how he was first captured, then shipwrecked. Orlando is jealous of Medoro, but Angelica lies and says Medoro is her brother.

Alcina is attracted to the knight Ruggiero. She uses her magic to make him forget Bradamante and love her instead. Bradamante discovers Ruggiero's "betrayal." She shows him the ring he gave her therefore breaking Alcina's spell. Ruggiero feels guilty for his actions.

Act 2
In a grove with green secluded spots, Astolfo reflects how he loves Alcina, but is tormented by her unfaithfulness.

Meanwhile, in a mountainous alpine region with a high, precipitous cliff, Angelica and Medoro swear their love and part ways. To rid herself of Orlando, Angelica sends him to fight a monster who guards an elixir of youth.

Orlando enters a cavern and is trapped. Realizing Angelica's faithlessness, he digs his way out.

Angelica and Medoro marry in a countryside at the foot of a hill. They carve their vows on a nearby tree. Orlando finds the tree, and on reading the inscription, becomes so furious that he starts destroying the trees.

Act 3
The place is at the Entrance Hall before the Temple of Hecate. Astolfo believes Orlando dead. With Ruggiero and Bradamante, he plots revenge against Alcina. The secret of Alcina's power lies in an urn, which is locked in the temple of Hecate. They await Alcina's return.

Inside the temple of Hecate, Bradamante disguises herself as a man. Alcina falls in love with her. Orlando, still raving mad about the marriage of Angelica and Medoro, fights with the temple statues, inadvertently destroying Alcina's power.

In a deserted island. Alcina tries to attack the sleeping Orlando, but is prevented by Ruggiero and Bradamante. Astolfo returns to arrest Alcina. Orlando regains his reason and forgives Angelica and Medoro.