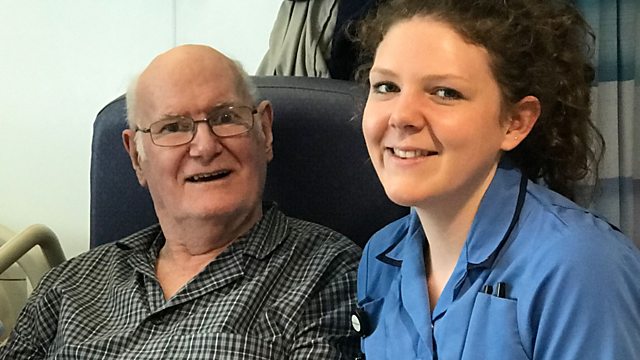 Life in the NHS captured in immersive stereo and specially composed choral music. NHS staff join with the Bach Choir to mark the 70th anniversary of the health service.

The patterns and flows of life in the NHS captured in immersive stereo, with specially commissioned music sung by NHS staff and The Bach Choir.

In the maternity unit at Birmingham's Heartlands Hospital, the heart rate of an unborn child gives cause for concern. Across town at Queen Elizabeth Hospital, patients with critical heart conditions are closely monitored hour by hour. Downstairs in A&E, staff begin their shift not knowing what awaits them.

Between the Ears marks the 70th anniversary of the NHS with a unique composition depicting two Birmingham hospitals as they care for patients from cradle to grave. In four movements, the rhythms of the health service are accompanied by a special choral work written by award winning composer Alex Woolf, an alumnus of the BBC's Proms Inspire Scheme.

The NHS Symphony is recorded in binaural stereo which simulates how the human ear hears sounds. For a fully immersive experience, the programme is best listened to on headphones.

The Bach Choir are joined by members of the Barts Choir, the Lewisham & Greenwich NHS Choir and the Royal Free Music Society Choir