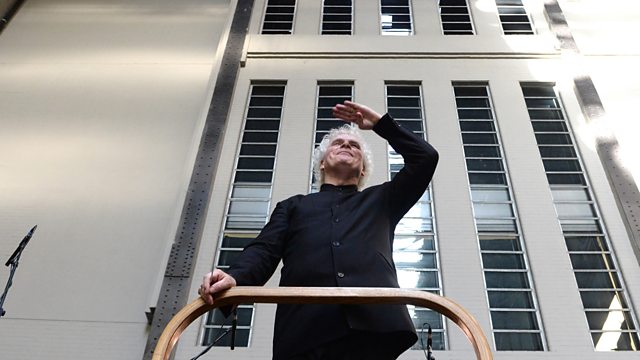 Gruppen from Tate Modern, London. Stockhausen's masterpiece as recreated earlier today by the London Symphony Orchestra in the epic spaces of the Turbine Hall.

Gruppen - Stockhausen's masterpiece re-created earlier today in the Turbine Hall of Tate Modern.
Simon Rattle and the London Symphony Orchestra are surrounded by the audience in a rare performance of Karlheinz Stockhausen's 1955 landmark of the avant-garde. Stockhausen wrote: "When I was composing Gruppen for three orchestras, I had a little room in Switzerland for three months, and there was a small window in front of my desk through which I could see the incredible shapes of the mountains on the other side of the valley. Whole envelopes of rhythmic blocks are exact lines of mountains that I saw... right in front of my little window." The epic spaces of the home of modern art also promise to deliver an overwhelming soundscape for Olivier Messiaen's Et exspecto resurrectionem mortuorum (I Await the Resurrection of the Dead) of 1964-5. Messiaen was inspired by the Hautes-Alpes whilst he worked on the score which he said was "destined for vast spaces." The Tate Modern performances were sold out within minutes, so this is a special occasion not to be missed. The experience will also be made available on Wednesday evening in binaural sound.
Presented by Tom Service and Robert Worby.