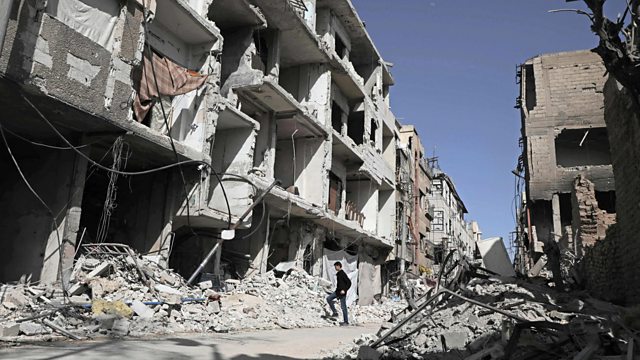 The Virus of War

The challenge of rebuilding Syria. Kate Adie introduces stories and insight from correspondents around the world.

The challenge of rebuilding Syria. Kate Adie introduces stories and insight from correspondents around the world:

Jeremy Bowen has just returned from Damascus and concludes that though the fighting may have stopped "the virus of war has spread - not just breaking bodies, hearts, and minds, but poisoning the future."
Lucy Ash discovers how seaweed farming in Zanzibar has proved a liberating force for thousands of women on the island.
Helen Nianias hears about one Uganda woman's life-changing encounter after a night out clubbing. Slightly tipsy, on her way home in the early hours of the morning, she came across a baby that had been abandoned in the street and took it home.
Ashwin Bhardwaj retraces the steps of Brigadier Edmund "Trotsky" Davies in Albania and reveals his secret mission during the Second World War.
And Heidi Fuller-Love discovers how the fallout from the Greek financial crisis is still having an impact - on animals as well as people.