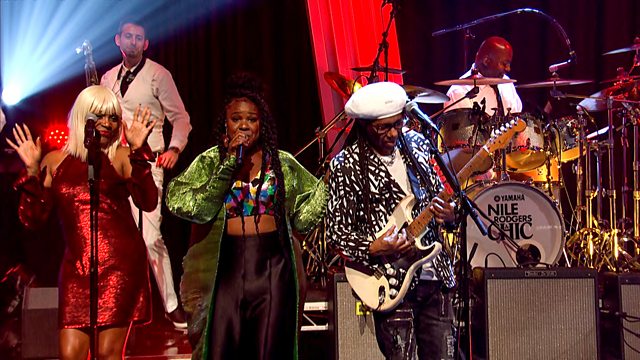 Joining Jools on the last show of the series and finally making their debut on the show are funk and disco legends Nile Rodgers and Chic, who are joined by contemporary British artists such as Cosha, aka Bonzai, and producer and songwriter Mura Masa.

Denver-based old-school soul combo Nathaniel Rateliff & the Night Sweats come to the show with a song or two from their second album Tearing at the Seams, which sees them revisit their take on the golden years of Stax, complete with vibrant and integral horns, a steadily funky rhythm section and a bearded vocalist who takes it to the bridge every time. Making his UK TV debut is native South African Nakhane, an LGBTQ trailblazer with a startling voice. Now based in east London, he has recently released his second album You Will Not Die, which features songs full of strutting glam and electro flourishes.

Former Supergrass frontman Gaz Coombes makes his solo debut on the show with songs from his very well-reviewed third solo album World's Strongest Man, which is his reflection on what it means to be a strong man in 2018. London four-piece, signed to Rough Trade, Goat Girl perform tracks from their self-assured debut, which sees them rage against modern Britain from public transport to mental health.

Finally, and completing the line-up, much-loved cockney duo Chas & Dave perform a track from their first album in 30 years to feature new songs, A Little Bit of Us.