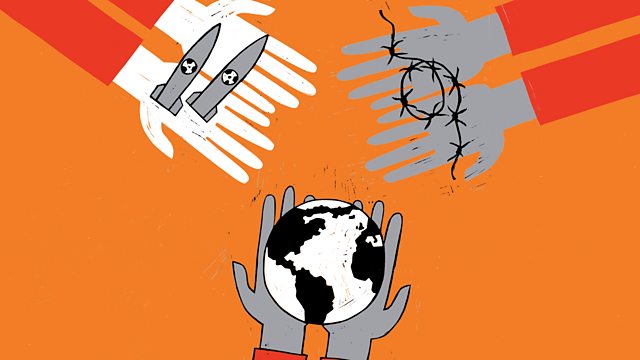 Historian Margaret MacMillan asks if war an essential part of being human.

Is war an essential part of being human? Are we destined to fight? That is the central question that historian Professor Margaret Macmillan addresses in five lectures recorded in the UK, Lebanon and in Canada. In her series, called The Mark of Cain, she will explore the tangled history of war and society and our complicated feelings towards it and towards those who fight.

She begins by asking when wars first broke out. Did they start with the appearance of homo sapiens, or when human beings first organised themselves into larger groupings such as tribes, clans, or nations? She assesses how wars bring about change in society and, conversely, how social and political change influences how wars start and are fought. And she discusses that dark paradox of war: that it can bring benefits and progress.

The programme is recorded before an audience at the BBC Radio Theatre in London and includes a question and answer session chaired by Anita Anand.

Margaret MacMillan is emeritus professor of international history at Oxford University and professor of history at the University of Toronto. She says: "We like to think of war as an aberration, as the breakdown of the normal state of peace. This is comforting but wrong. War is deeply woven into the history of human society. Wherever we look in the past, no matter where or how far back we go, groups of people have organised themselves to protect their own territory or ways of life and, often, to attack those of others. Over the centuries we have deplored the results and struggled to tame war, even abolish it, while we have also venerated the warrior and talked of the nobility and grandeur of war. We all, as human beings, have something to say about war."

Fearing and Loving: Making Sense of the Warrior—Margaret MacMillan

See all clips from War and Humanity (2)