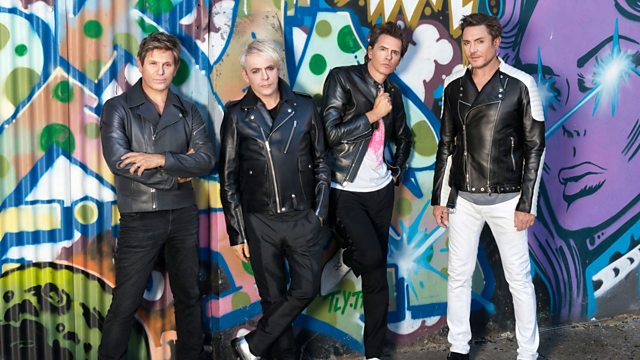 John and Roger Taylor on 40 years of Duran Duran, the Bradford Literature Festival, Brian Clarke, a stained-glass artist on working with light, and poet Alison Brackenbury.

Forty years after forming, two of the original members of the iconic New Romantic band Duran Duran, Roger and John Taylor, talk about their time in the music industry and reveal what inspires them to keep making music together.

The annual Bradford Literature Festival is a relatively new addition to Britain's literary landscape, but its junior status hasn't stopped it getting coups such as this year enticing Kate Bush to pay tribute in a public art installation to Emily Brontë. Five years on from the launch of the festival, Syima Aslam, director and co-founder of the Bradford Literary Festival, and Bradford-born crime-fiction writer A.A. Dhand discuss its significance.

The artist Brian Clarke has been pushing the boundaries of working with stained glass for the last five decades, commissioned by architects including Norman Foster, Zaha Hadid and Renzo Piano. In his studio he discusses the challenges of the art form, and his new exhibition Brian Clarke: The Art of Light at The Sainsbury Centre for Visual Arts in Norwich.

Today the sun is shining everywhere in the UK (though there is some cloud in Shetland). The poet Alison Brackenbury reflects on the way the warm sunny weather not only makes people happy but, since the English language began to be written, it has inspired poetry.

Fly by Night, Tim Winton, Poems by teenagers, Music discovered in a painting

The Art of Light

Brian Clarke: The Art of Light at the Sainsbury Centre from 17 Jun to 14 Oct