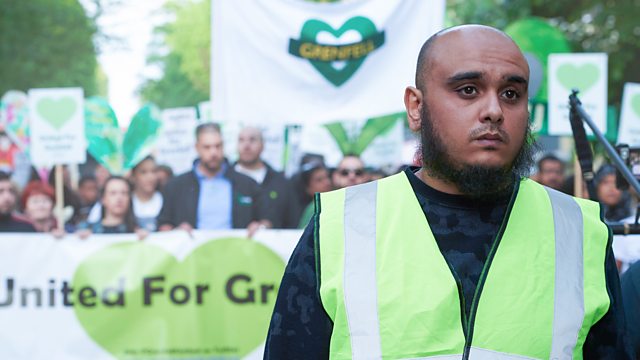 Documentary filmed throughout the year following the Grenfell Tower fire, hearing from those directly affected by the most devastating tower block fire in British history.

This documentary from Bafta-winning director Ben Anthony brings together multiple stories from the Grenfell Tower fire tragedy - the most devastating tower block fire in British history. It was made over the course of one year, with filming starting on the day after the fire.

The meticulously crafted film draws from hundreds of hours of interview, archive, social media content and observational footage to form a compelling, moving and lasting record of the events before, during and after the fire. It features intimate accounts from many of the men, women and children whose lives were forever intertwined and irrevocably changed that night - some of whom have never spoken publicly before.

The film remembers those who tragically died, while hearing from survivors, the bereaved, members of the local community, faith leaders, the police and the local councillors from Kensington and Chelsea. The documentary contains the largest collection of interviews with people connected to the tragedy to be gathered together in one single film.

In the immediate aftermath of the fire, the documentary team were in the area around Grenfell Tower recording the effects on the community - in the emergency relief centres, on the streets, in temporary accommodation, in hotels and in people's homes. Over the following months, the team spent significant amounts of time filming with many of the people who were most affected, documenting both their immediate experiences and the longer-term challenges they faced as they waited to be rehoused and attempted to rebuild their lives. The documentary captures the trauma, tragedy and grief alongside extraordinary moments of courage, unity and resilience.

The film tells the story from within the community with unique access to Grenfell United - the campaign group set up by the survivors in the wake of the fire - and Grenfell Speaks, the online streaming news channel created by one local resident and his iPhone which now has over five million viewers worldwide.

Of the many residents featured, Lorraine Beadle was one of the very first to move into Grenfell Tower, in 1975. Over the decades her beloved flat on the fourth floor became home to her most cherished memories, but now she must make the difficult decision to go back into the charred remains of the tower and say goodbye.

Amongst the other experiences captured, the film follows 32-year-old Karim as he searches for news of his uncle Hesham, who lived on the 23rd floor of Grenfell Tower, putting up missing posters around the local streets in the hope that someone will come forward with information. When Hesham's body is finally identified months after the fire, Karim is able to lay him to rest.

The film also reflects the role of social media in distributing information about the fire and its aftermath. Hundreds of people recorded powerful footage both during and after the tragic events of 14 June 2017. Much of this material was shared on social media, giving an immediate and far-reaching public voice to those affected.

See all clips from Grenfell (2)