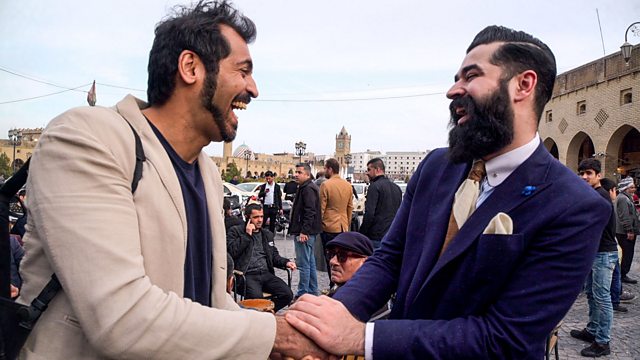 Ex-soldier Adnan Sarwar returns to Iraq to discover the country behind the headlines. Adnan accompanies the Kurdish Peshmerga militia on a very special convoy up to Mount Gara.

Adnan Sarwar arrived in Iraq in 2003 as a 24-year-old soldier with the British army. He initially viewed his mission as liberating the country's people from Saddam Hussein, but when parts of the population turned against the allied forces, Adnan's life was changed forever by an ambush which killed one of his friends in the army. He saw first-hand how driving Saddam from power led to more violence and ultimately the creation of Isis. Now, with Isis gone, Adnan is returning to Iraq to discover the country afresh, beyond the headlines and wars to meet everyday people rebuilding their lives. Travelling the length of the country from the snowy mountains in the north, he visits oil-rich territories still contested by different factions in the country, cities which bore the brunt of Isis's reign of terror and the allied bombing raids against them, the country's capital Baghdad and finally the southern marshes and deserts where he served with the army. Along the way he makes friends, comes face-to-face with old enemies and asks if the country can ever escape its cycle of violence.

Adnan's journey begins in Kurdistan as he accompanies the Kurdish Peshmerga militia on a very special convoy up to Mount Gara. He is with animal activist Blen Brifkani to witness the release of two brown bears, previously held in captivity, back into the wild. Brown bears are native to the mountains, but hunting and habitat loss mean there are hardly any left - and Blen wants to change that. Leaving Kurdistan, Adnan enters Mosul, which was held for three brutal years by Isis - also known as Daesh. Nearly 10,000 homes in the city were destroyed by 1,250 airstrikes, Isis bombs and street fighting in the battle to regain Mosul. He joins British and Iraqi members of a mine clearance team dealing with the terrible legacy left by Isis. Thirty-three mine-clearers have been killed since Isis left and the UN estimates it will take ten tears to remove all the bombs. But alongside the mine-clearing teams Adnan meets someone else trying to reclaim the streets - Al i Baroodi - who offers bike tours around his beloved city.

See all episodes from Journey in the Danger Zone: Iraq