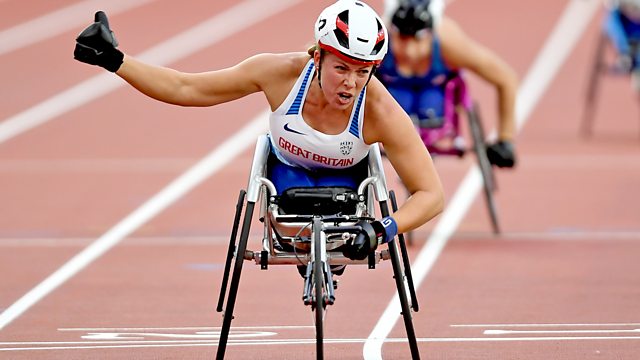 Weekend Woman's Hour: Hannah Cockroft on her Olympic success, Coming out as gay in the church, Anne-Sophie Pic

Hannah Cockroft on her hopes for the 2020 Olympics in Tokyo, has exam stress got worse for students and Michelin starred Anne-Sophie Pic on reaching the top of her game.

Paralympic gold medallist Hannah Cockroft talks about why she's counting down the days to the 2020 summer Olympics in Tokyo and why she's thinking about what to do when she stops competing.

What is making this exam season so stressful for students? Head Teacher Carolyn Roberts, Yvonne Murphy an educational psychologist and parent Debbie discuss the impact of exam reforms and anxiety related to the use of social media.

We hear how a man's body and brain change when he becomes a dad with the evolutionary anthropologist Dr Anna Machin.

Last week the CPS said 47 rape cases had been dropped after it emerged that the police or prosecution had not shared evidence with the defence. With headlines focusing on those who may have been wrongly convicted of rape we discuss how confident rape victims can be about how their complaint will be handled with Laurie-Anne Power a criminal defence barrister with 25 Bedford Row Chambers and Katie Russell from Rape Crisis England and Wales.

Plus new research suggests that there has been a 95 per cent increase in the number of women entering treatment for cannabis dependency. We hear from two women about why they started taking the drug and from Ian Hamilton from York University about his research.

What is it like to come out as gay as a member of the Christian church? We hear from Evangelical Christian Jayne Ozanne and Anglican Priest Sally Hitchiner.

And Michelin starred chef Anne-Sophie Pic tells us how she got to the top of her game even though she's had no formal training.

Dating in the 21st Century