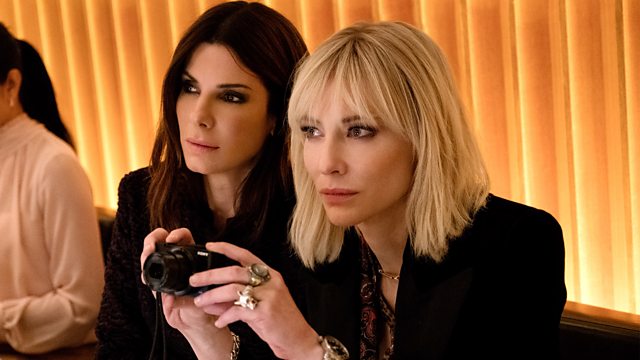 Ocean's 8 is the latest in the Ocean's heist movie franchise - but this time with an all-female gang starring Sandra Bullock and Cate Blanchett. Does the twist work? Larushka Ivan-Zadeh reviews.

As the World Cup kicks off the team strips are attracting as much attention as the scores: the new Nigeria home kit sold out minutes after its release. Simon Doonan, fashion commentator and soccer obsessive, talks about his favourite World Cup outfits and why some kits are such a hit.

Pianist and composer Alexis Ffrench, fresh from his performance at the Classical Brit Awards, tells John what he thinks the sphere of classical music could learn from the very different world of hip-hop.

A Slice through the World: Contemporary Artists' Drawings is a new exhibition in Oxford that celebrates the power of drawing in the digital age. Curator Stephanie Straine considers the state of drawing today with artists Olivia Kemp and Tacita Dean, whose work includes drawing, painting, photography and film, and whose new exhibition, Landscape, at the Royal Academy in London features monumental blackboard drawings in chalk.

Evolution by Alexis Ffrench is out in September 2018.  More information about Alexis can be found on his website.

Olivia's The Where That Was will be on show as part of the Royal Collection Exhibition at Buckingham Palace from 21st July until the end of September.
Image:  Work in progress by Olivia Kemp. Copyright:  Olivia Kemp