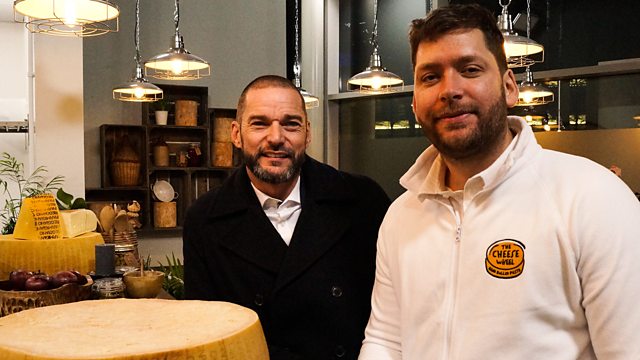 Hollings and The Cheese Wheel

Fred Sirieix welcomes Hollings, an idea serving British chophouse classics, and The Cheese Wheel, an Italian-inspired fresh pasta stall with a cheese wheel at its heart, to Manchester. Hollings is looking for £200,000 to open in London's commuter belt. The Cheese Wheel is asking for £500,000.

Hollings is the brainchild of the ex-Hix Group head chef Ronnie Murray and ex-Hix bar manager James Randall. Both wanted to create a restaurant that would serve classic British food and drinks, with city-centre food and service, in the suburbs. On the menu - tiny tinis (mini cocktails), red leicester mac 'n' cheese with slow braised brisket and horseradish, and truffle cheese chips. Unlike most other ideas, Hollings has never traded or opened to the public. It is purely an idea on paper. Investors interested include Lydia Forte of the five-star Rocco Forte Hotels group with hotels in London, Edinburgh and across Europe, who is looking for new concepts to fit into her luxury hotels. Another interested investor is Darrel Connell, partner with IMBIBA Partnership, an investment group that specialises in backing and growing high-end bar and restaurant concepts. To date IMBIBA has backed over 100 individual F&B businesses across 16 different brands.

The Cheese Wheel was established by Graham Bradbury in 2017, after he approached Camden Market with the idea of serving fresh pasta from a cheese wheel. An ex-chef at L'Escargot in London, Graham wants The Cheese Wheel to become the next Italian-inspired restaurant chain. The signature dish is fettuccine alfredo - freshly rolled pasta, cooked to order and tossed in a giant cheese wheel of grana padano. One investor is interested in The Cheese Wheel - Jeremy Roberts, CEO of Living Ventures, a northern-based restaurant and bar group with an annual turnover in excess of £100 million.

Can these two ideas convince the investors they are worth investing in? They have got three days to prove their food, business plans and management team have what it takes.

See all clips from Hollings and The Cheese Wheel (3)